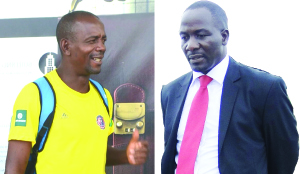 By KALUMIANA KALUMIANA –
NKANA play the game of their 2014 CAF Champions League lives today in search of a dramatic result against Mbabane Swallows that can ensure their interest in this year’s competition.
Zambia’s CAF Champions League envoys host their Swaziland opponents trailing 2-0 from their preliminary round, first leg away match played last Sunday at Somhlolo Stadium in Mbabane.
The Masautso Mwale-tutored Nkana must score three unanswered goals against Swallows this afternoon at Nkana Stadium in Kitwe to advance to the first round.
Failure to do so today will see Nkana for the first time ever suffer an embarrassing preliminary stage exit since their entry into continental club cup action dating back as far back as 1976.
“We will get the three goals, actually more than three goals to win,” Nkana captain Sydney Kalume said.
The spot light will fall yet again on strikers Ronald Kampamba and Francis Kombe who after failing to find the target in Swaziland must overcome the massive pressure at home in front of an easily combustible and raucous crowd.
Pressure is also on Nkana’s backline built around Christopher Munthali and Billy Mwanza following their forgettable day last Sunday in Swaziland.
Midfielder Kelvin Mubanga is a doubt after sustaining a knee injury in training that might just open the route for Shadreck Musonda to start today.
Meanwhile, Swallows captain Tony Tsabedze said they hoped to complete their giant killing act this afternoon.
Swallows’ win last weekend ended Nkana’s unbeaten record at home and away against Swaziland opposition since 1983.
“We are not coming here to defend or something we are here to win so that we can move to the next stage,” Tsadedze said.
“We don’t look at what other people are doing but we focus on ourselves and we are looking forward to winning this game.”
Swallows coach Chris “Gazza” Tembo arrives with added fire power in the form of Swazi striker Sabelo Ndzinisa and Mike Mohammed of Ghana who missed the first leg due to injury and should complement the deadly Felix Badernhorst who was a constant threat inside Nkana’s box last Sunday.
And the winner over both legs will face victor of today’s other preliminary tie involving Kampala Capital City Authority (KCCA) of Uganda who host  Sudan giants, El Merriekh in Kampala at 16:00 hours Zambian time.
KCCA are firm favourites to advance to the March 1 first round date after a shock 2-0 away win over El Merriekh in Omdurman last weekend.