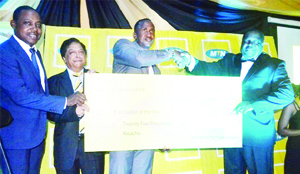 LUSAKA – BRONSON Chama says he is shocked to have won the 2013 Zambia Footballer of the Year award.
The 27-year-old Red Arrows defender beat off stiff competition from Zesco United midfielder Kondwani Mtonga and strong favourite for the award Ronald ‘Sate Sate’ Kampamba of Nkana.
“I am humbled and greatly honoured to win this award. It is important when you are working hard and people appreciate you,” Chama said.
“I wasn’t expecting to win this award and I said earlier on that this would go either way.”
Chama had a decorated season for both club and country after captaining Zambia to 2013 Cosafa Cup victory over defending champions Zimbabwe in July to cap a memorable return to the national team for the first time since 2009.
He later led Arrows to their debut Barclays Cup win last November.
A month later, Chama captained Zambia to a third place finish at the 2013 CECAFA Cup in Kenya where Chipolopolo appeared as a guest team.
“I cannot forget my club mates and coaches and especially my team mates at the national team for all the support,” Chama said.
And Nkana midfielder, Bruce Musakanya said winning the Young Player of the Year award was a great motivator to his career.
“I am glad I have won the Young Player of the Year which is a plus to my career. It has motivated me very much. This shows that I need to put extra effort if I have to win the Player of the Year award in the future.  – MTNFootball