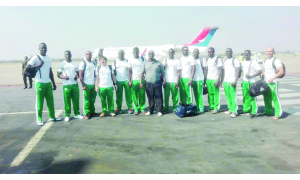 BY ADRIAN MWANZA –
THE Zambia Sevens rugby team today gets into action in the high-profile inaugural Maseru Sevens tournament hoping to build on the successes from the Zambia International Sevens held earlier this month.
Zambia-A took the main trophy in the Kwesé Sports Zambia International Sevens held at the Leopards Hill Polo Crosse, which was a month after taking the plate title at the Vic-Falls Sevens in Zimbabwe.
But today, they are up against even bigger fish as they have to navigate past Zimbabwe, Namibia and South Africa All-Stars from the group.
Zambia starts the tournament with an 11:30 date against Zimbabwe with the tournament live on pay-per-view Kwesé Sports.
This two-day first ever international sevens rugby tournament in Lesotho will be held at Maseru National Stadium and will also have a schools section.
Teams that are taking part include the South Africa Academy, Zimbabwe, Namibia, Botswana, Mauritius, South Africa All Stars and Swaziland.
This will be Lesotho’s international sevens debut.
The opening game for Zambia will be a grudge match for the two countries who last met in the final of the Zambia international sevens three weeks ago which Zambia won to take the title.
Zambia had to come from behind to narrowly beat Zimbabwe 14-12.
Zimbabwe will look to redeem themselves from the defeat but Zambia coach Musonda Kaminsa believes his team is up to the task.
Kaminsa said he was aware that Zimbabwe was a strong team but that he had done his homework and was sure of getting a positive result.
“We are not intimidated by any of the teams at the tournament and we are going to prove that Zambia is a force to reckon with,” he said before departure to Maseru via Durban on Proflight.
He said he had selected the best players to represent the country at the tournament where Zambia is in a tough Group B.
Kaminsa said he was not intimidated by any of the teams at the tournament and that they would give most the teams a good run for their money.
He however, admitted Zambia was pitted in a strong group which required hard work from his players to get to the next stage.