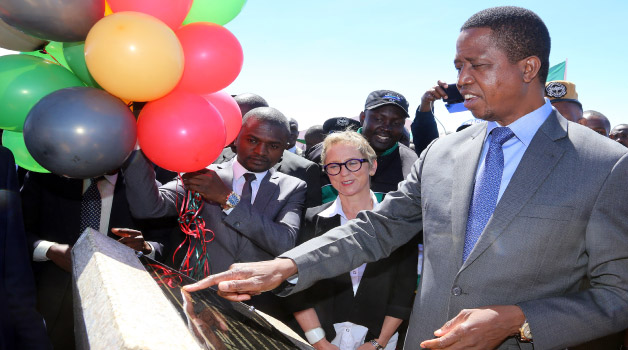 PRESIDENT Edgar Lungu has said Zambia is on course to transform the current power deficit into a surplus and make the country a net exporter of energy within 18 months.
The Head of State said this yesterday when he commissioned a US$200 million 100 mega watts (MW) of solar photo–voltaics (PV) power project at Lusaka South Multi-facility Economic Zone (MFEZ).
This was the first phase of the 600MW solar power project to be implemented at a total cost of $1.2 billion.
The President said he had directed the Industrial Development Corporation (IDC) to drive the urgent installation of at least 600MW of solar power in order to redress the current power deficit in Zambia.
“This is a proud moment for us in Government and IDC in particular because when we say we have embarked on a credible diversification programme across various sectors we mean just that,” President Lungu said.
The Head of State said the project would be implemented through the Scaling Solar Programme and was the country’s first PV independent power project.
President Lungu said the project was a practical demonstration of Government’s resolve to create a diversified energy sector.
“The difficult realities of climate change have taught us that over-reliance on hydropower won’t just do. I am here to promise you that we shall continue to walk-the-talk in every way possible,”
President Lungu said.
Zambia is the first country in Africa to implement the Scaling Solar model and the projects are aimed at providing competitively priced,clean power that will reduce Zambia’s dependence on hydro resources.
Mr Lungu thanked International Finance Corporation, the World Bank group and the US government through the Obama Power Africa Initiativefor complementing the Government’s effort to diversify the nationalenergy mix.
IDC chief executive officer Andrew Chipwende said 48 firms had applied for the solar project, but only seven made it to the final bidding list.
Mr Chipwende said the criteria that would be used to select the winning bidder would be based on the one with the lowest tariff.
Finance Minister Alexander Chikwanda said Government had created the IDC as a veritable delivery vehicle to foster the accelerated industrialisation strategy of the country.
Mr Chikwanda said it was expected that IDC would be in a position to raise resources to support existing businesses and Greenfield industrial ventures.
World Bank country manager for Zambia Ina Ruthenberg said the development of solar electricity generation was aimed at overcoming the current power crisis.