By SANDRA MWILA –
CHIPOLOPOLO striker Collins Mbesuma has been left club-less after his Highlanders Park terminated his contract.
Mbesuma joined Highlanders last season on a two-year deal from Mpumalanga Black Aces after winning the PSL Golden boot in the 2015-2016 season, his second in the South African league.
The striker emerged top scorer after scoring 14 goals for Mpumalanga Black Aces.
According to the kickoff.com, Highlanders Director Brad Kaftel confirmed that his club had parted company with Mbesuma on mutual agreement.
Mbesuma’s stay at Highlanders was not so successful due to injuries and only managed to feature in 14 league games and scoring four goals. 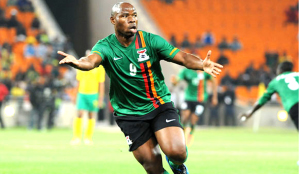 “With Collins Mbesuma, we agreed to terminate his contract. There was a mutual agreement and the agreement is we have to part ways,” Kaftel told kickoff.com.
Kaftel hailed Mbesuma for being a prolific striker but and that age was catching up with him.
“Collins is a legend and he’s a fantastic goal scorer. I can only say that he’s a good guy, great player, a gentleman, and I’ve only got good things to say about Collins. I think also his age has caught up with him and he’s not a youngster anymore,” Kaftel said.
He said the National First Division (NFD) required players with a lot of speed and Mbesuma was not that player.
Mbesuma has had stints with Luanshya Mine Police FC, Roan United in Zambia before moving to Kaizer Chiefs in South Africa for perhaps his best football period.
He then went to England where he joined Portsmouth and then moved to Portugal where played for CS Maritimo.
He then moved to Turkish side, Bursaspor before making a return to South Africa where he played for Mamelodi Sundowns, Moroka Swallows, Golden Arrows, and Orlando Pirates.