By GODFREY DUBE –
DEPARTURE for the Zambia under-17 team which should have left the country yesterday for the COSAFA championship in Mauritius has been delayed and would only leave tomorrow.
The FAZ said yesterday that logistical challenges had necessitated the deferment on going for the regional age-group tournament.
Despite the changes in dates, coach Numba Mumamba remained positive saying this would not affect team in any way as they get ready for the tournament. 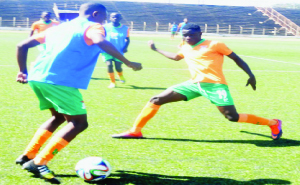 • COSAFA READY: Under–17 players in training at Independence Stadium in Lusaka ahead of the Mauritius tournament. Picture by ADRIAN MWANZA

Football Association of Zambia (FAZ) Communication Manager Desmond Katongo said the delay was caused by a number of issues with one of them being that four players had not yet got their passports in time to make the flight yesterday.
Katongo said the association had confident in the team and was optimistic they would not disappoint at the championship.
And Mumamba says the delay of the team’s departure would not affect them as such things happen in football.
Mumamba said the team had prepared well ahead of the championship and would not be affected by the delay adding Zambia’s first is on Friday against Madagascar.
He admitted that sending the team in batches would have had worse consequences on the players’ minds ahead of the crucial challenge they were about to face.
He said morale was high in camp and was optimistic the team would deliver as expected by the country stating the team must leave together.
Zambia is in Group B of the competition with South Africa, Madagascar and Mozambique.
The top two teams from Groups A and B will qualify to the semi-finals that will be played on next week Friday (July 28) with the final set for two days later