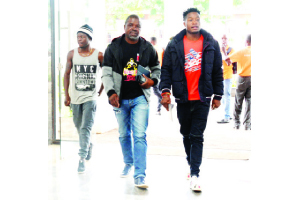 By GODFREY DUBE –
ORIENTAL Quarries Boxing Promotions (OQBP) director promotions Christopher Malunga says the army’s refusal to allow boxers turning professional is killing the sport in the country.
Malunga said it was sad that most boxers in the amateur ranks belonged to the defence forces and were not allowed to turn professional.
He said boxers were forced either to retire from the service if they wanted to turn professional or remain in the amateur ranks.
“To be honest with the public, this issue of boxers who belong to the army not being allowed to turn professional is discrimination at its worst kind. I am not scared to say this because boxers are denied to see their dreams of becoming world class boxers,” Malunga said.
Malunga queried why the army allowed footballers to go professional and barred boxers from turning professional.
“Let me give you a good example, Anthony Mwamba had to retire from the army to go professional, Joseph Chingangu, Lottie Mwale among others. If you asked me in the first place why they employed these people, its boxing and I think this discrimination should stop from now onwards,” Malunga said.
He said the Boxing Board of Control (BBC) had given the stables a go ahead to follow up the matter with government.
“I think it’s time we acted now and save the dreams of these boxers of becoming professional boxers. From here am going straight to meet the Minister of Defence after which I will write a letter to President Edgar Lungu over the same issue,” Malunga said.
Malunga has since appealed to the Ministry of Sport and the Defence ministry to solve the problem that has continued to kill the sport of boxing in the country.
“Look at Christopher Katongo, he went to play in Germany, South Africa among other countries and when he came back he was even promoted. Then why should boxers not be allowed to turn professional? This discrimination is the worst of its kind and if not addressed will kill our sport,” he said.
He said a lot of talent in the army was going to waste due to the fear of losing their jobs when they turned professional.
“Look! boxers are told to retire from the army when they want to go professional but its different with footballers. Is football not a sport like boxing? If it is a sport, then let our sports men and women see their dream of becoming professional boxers come true,” Malunga said.