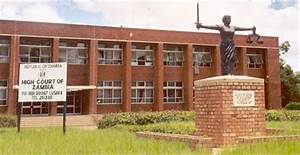 KABWE High Court has sentenced three people to death by hanging for murder after finding them guilty of killing their 70-year-old aunt by burying her alive on suspicion of practicing witchcraft.
Mr Justice Charles Zulu said Aaron Ngosa, 48, Lyson Kunda, 53, and 28-year-old Kelvin Mwewa of Serenje District in Central Province should be hanged until pronounced dead for murdering Jean Bangwe in April last year by burying her alive.
This was a case in which the three were jointly charged with murder.
“I am satisfied that the killing of Jean Bangwe by the three accused persons in a joint enterprise was willful; the trio at the material time was of sound mind and discretion…
“…As sane adults knew the consequences of murder, and must bear capital punishment. The sentence in respect of each convict is death. Accordingly, each convict is sentenced to death,” Mr Justice Zulu said when he delivered his judgment yesterday.
The Court heard that the trio dragged the old woman from her sick nephew’s home to the grave yard where she witnessed the digging of the grave for her own burial.
The three were later rewarded with beer by some family members and friends back at the village when they announced that they had killed the old woman.
Particulars of the offence were that Ms Bangwe’s nephew Oscar Musanda had been unwell and when the family visited witch-finders they all pointed at the old woman as being responsible for the illness.
The three had initially forced Ms Bangwe to stay at the patient’s house to undo her perceived witchcraft on Musanda but were later incensed when they discovered that the old woman had been withdrawn by her daughter.
The three who had pleaded not guilt had told the court during trial that the woman had previously killed her six brothers through witchcraft and thereafter extended her wizardry to her nephews.
However, Mr Justice Zulu said with the shift in terms of sentencing policy, the belief in witchcraft could not stand as extenuating circumstances as agued by the trio’s lawyers.
He said a belief in witchcraft was not necessarily problematic but what was unacceptable were the actions taken in consequence of the belief which turned out to be a violation of human rights and in most cases death on those suspected of practicing witchcraft.
Mr Justice Zulu said with shift of sentencing policy, it was clear that the murder of Ms Bangwe by the three had no extenuating circumstances neither could it be justified in law.