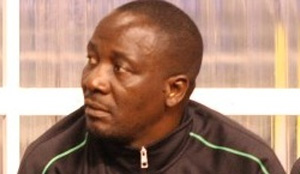 By KALUMIANA KALUMIANA and FELIX MALUNGA –
KAMPALA City Council Authority (KCCA) head coach George Nsimbe has warned Nkana to expect vengeance when the two sides clash in the first round of the 2014 CAF Champions League competition.
The last meeting between the two clubs was in the old African Club Champions Cup in 1992 that saw Nkana beat KCCA 4-0 away in the first leg before defeating them 2-0 in Kitwe to advance to the quarter-finals.
Nsimbe, who suffered elimination at the hands of Nkana as a player, rated the Zambian champions as a good side but that the Kitwe side should brace for a tough match against his team.
“Nkana is good team and it will be a good game but they should brace for us because this game will be a game of vengeance for the loss we suffered in 1992 when I was a player at KCC. Now that I am coach, they will be in for it. I want to revenge that loss. We have prepared well and I hope they are well prepared too,” Nsimbe said.
The Ugandan champions ejected El Merreikh of Sudan last weekend on a 3-2 goal aggregate, while Nkana recovered from a 2-0 loss to Mbabane Swallows in the first leg to win 5-2 in Kitwe on Saturday.
And Nkana coach Masauso Mwale has said facing KCCA is better option than playing El Merriekh.
Mwale said in an interview yesterday that he knew very little about KCCA who will be facing Nkana for the second time in continental cup action.
“Facing KCCA is a better because El Merriekh have a better pedigree and you cannot take away the experience they have and you have to respect that,” Mwale said.
Mwale said KCCA were a dark horse even though Nkana have a history with the Uganda champions and that they will prepare adequately for the first leg on March 1 at Nkana Stadium in Kitwe before the heading to Kampala on March 8.
“I don’t know much about KCCA and I am trying to see if I get even any information about them,” Mwale said.
Nkana secretary, Ken Mwansa said Nkana now needed to finish up the contest in the first leg when they host KCCA. Mwansa said Nkana proved that it was a good team after overturning a three goal deficit and eject a stubborn Swazi side. “We played them (KCCA) before, but we don’t know how they play in this age. To beat the Sudan side, it means that KCCA are a good side and we have to do our homework,” he said.