CHIKUKU Orphanage Centre, heaving with 88 children, triggers goose pimples in a first-time visitor.
Though the children walk about excitedly, clearly grateful for the only place they have ever known as ‘home’, it is not hard to imagine the discomfort they endure in what is a crowded institutional environment.
The shabby 15-room structure in Kasama, in northern Zambia, is almost bursting at the seams, as the number of children it houses in the mostly improvised dimly-lit rooms has grown significantly over the past 30 years.
The centre throws a spotlight on one of the fast-growing maladies afflicting modern-day Zambia – the plight of children with no family structure. 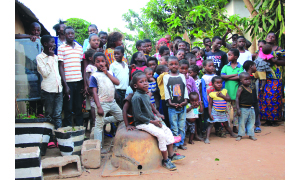 •SOME of the children at Chikuku Orphanage Centre in Kasama. Pictures by CHARLES SIMENGWA