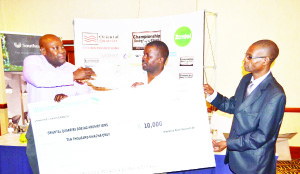 ORIENTAL Quarries Boxing Promotions (OQBP) yesterday landed a combined donation of K47,000 ahead of hosting the double World Boxing Council (WBC) title fights set for March 15 at the Government Complex in Lusaka.
Southern Sun Hotel has offered to accommodate the WBC officials at a cost of K22,000 with Madmax Auto Spares Company weighing in with K10,000 as GS4 Security Company pumped in K15,000 towards the event.
The main fight will see Zimbabwean boxer Charles Manyuchi fighting Patrick Allotey of Ghana in a WBC International welterweight title with Catherine Phiri exchanging punches with Pia Mazelanik of Germany for WBC Silver bantamweight belt.
Southern Sun Hotel sales and marketing manager Victoria Magnusson said at a media briefing that the hotel will provide accommodation to the WBC officials that will be coming for the title fights.
“We have had a long standing with the boxing stable and therefore thought it wise to offer accommodation to WBC committee valued at K22,000.This is one way of becoming part and parcel of promoting boxing,” she said.
Madmax marketing manager Maboshe Nyambe said he was impressed with the good work OQBP has put into the organization of the tournament and expressed hope that Catherine and Manyuchi will carry the day.
And OQBP manager Christopher Malunga paid tribute to the sponsors for coming on board ahead of next month fight. Malunga said the stable has now got a deficit of K96,000 from its K753,000 budget.
He also commended the media for the role it has played in highlighting the tournament and also attracting sponsors to come on board to help successfully stage the title fights.
“I would like to commend the sponsors that have come on board and the media should be commended for the brilliant coverage which has made it possible for the corporate to be associated with hosting the fights.
“I am sure the companies would want to be part and parcel because they know that the media is an advertising tool. For us to raise this amount it shows that there is a lot of work done by the media,” he said.
Malunga said the boxers were in good shape and ready for the fight and called on the fans to turn up in numbers and support them.
Zambia Professional Boxing and Wrestling Control Board (ZPBWCB) secretary, Simon Mwale advised Manyuchi not to relax after Allotey’s manager showered praise ahead of the fight.
“I would like to advise all the boxers especially Manyuchi not to relax in training following the praise by Patrick Allotey’s manager (Kwabena Kwarteng) that he is a good boxer.
It is a mind game to make you relax but train as though all your life is centered on boxing. Train harder to win the title and make Zambia proud,” he said.
Meanwhile, OQBP has brought in a Zambian RnB and pop singer ZU based in Philadelphia, United States of America (USA) to provide entertainment during the fight.