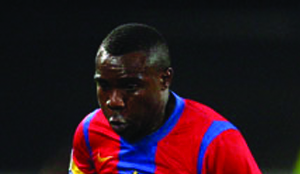 By KALUMIANA  KALUMIANA –
CHIPOLOPOLO coach, Patrice Beaumelle says he is happy to hear that striker Fwayo Tembo has found a new club following his move to Hungary’s Kaposvari Rakoczi.
Tembo recently joined Kaposvari on a one year deal after storming out of Romanian club Astra FC last September.
Beaumelle said in an interview that Fwayo was in his plans and hopes the striker’s move would see him back in competitive action as soon as possible.
“I am happy I would like to use him but he needs to have a club, to play, he knows that,” Beaumelle said.
“As soon as he is fit and playing, he is an amazing player and he is the kind of player who can make a difference you saw when we used him against Lesotho and Ghana he did very well.”
Tembo’s last appearance for Chipolopolo was in Zambia’s 2-0 loss away to Egypt in a friendly played in Cairo on November 14, 2013.
“I am looking forward to seeing him play competitive football and as soon as he is doing that of course he will be part of my plans like everybody else,” Beaumelle said.
“After that I will take the best decision to ensure I get the best team. I want him to be hundred per cent ready like the other players.”
Kaposvari are currently bottom of the Hungarian league in 16th place on 10 points from 18 matches played.
Tembo dumped Astra seven months ago following a fallout with the club owner who criticized the Chipolopolo striker for performing below expectations.