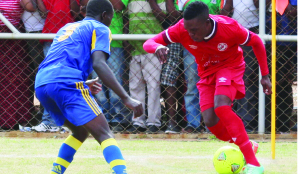 • NKANA midfielder, Shadreck Musonda (right) tries to dribble his way past Saka Mpiima of Uganda’s Kampala City Council Authority during the CAF Champions League match at Arthur Davies Stadium in Kitwe at the weekend. The game ended in a 2-2 draw. Picture by JEAN MANDELA

By ELIAS CHIPEPO –
FOOTBALL Association of Zambia (FAZ) president, Kalusha Bwalya has tipped Nkana to qualify to the second round of the 2014 CAF Champions League despite drawing 2-2 with Uganda’s Kampala City Council Authority (KCCA) on Saturday.
Kalusha said in an interview in Kitwe after the match that he was confident that Nkana would overcome KCCA and seal a place in the second round of the Africa’s most prestigious club competition.
Nkana rallied from a goal down to take a 2-1 lead, only for KCCA to level the scores and left the Zambian side needing a win in this weekend’s return leg to progress to the next round.
“It was a tough game and Nkana know what they have to do to get to the next round. Football is like that sometimes for it does not go according to how one wants it to be. We were expecting a certain result but they (KCCA) came back fighting to snatch a draw. We would have been happier to have gone with a goal lead,” he said.
Having sailed past the preliminary round, Kalusha said, it was always going to be tough for Nkana as the competition progresses but remained confident that the Zambian league champions could also go to Kampala and get the needed result.
“Nkana have got an experienced coach who will obviously get to look at different videos of KCCA and talk to the players so that they can go to Kampala and do everything possible to get the victory and qualify,” he said.
Kalusha, however, showered praise on the team, saying they played well despite not getting the result everyone expected and head into Kampala with a goal advantage.
And Zambia Sports Fans Association (ZASOFA) chairperson, Peter Makembo urged Nkana not to despair but fight on until qualification to the second round was attained.
Makembo, who throughout the match with his band drummed up support for Nkana at Arthur Davies Stadium, said his association would continue rallying behind the team because they believed it had the potential to reach far in the competition.
He appealed to the Masautso Mwale-led coaching bench to work on the many mistakes observed in the 2-2 draw against KCCA, saying Nkana had what it takes to upset tables even when playing away from home.