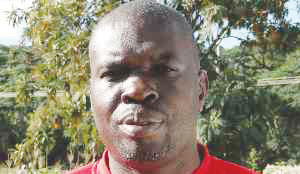 By FELIX MALUNGA –
Ferroviario  0   Zesco   0
ZESCO United yesterday kicked-off their 2014 CAF Confederation Cup campaign with a virgin draw against Mozambican side, Ferroviario da Beira in the coastal town of Beira.
It was a fair start for coach, George Lwandamina, who took up the top job at Zesco more than a week ago, and will now need to fashion out a win in the return match this weekend in Ndola to progress to the next stage of the competition.
In this Confederation Cup first round, first leg played at Estadio do Ferroviario,  the Zambian envoys had the home team on the ropes but the agility of goalkeeper, William Manyatera kept the Mozambicans alive.
Zesco, who are returning to continental football after a two-year absence, dominated the match from the start, making a mess of their hosts but could not get past the goalkeeper.
Manyatera was the busiest man on the pitch and pulled off some breathtaking saves from Winston Kalengo and Jackson Mwanza.
On any other day, Zesco could have scored at least four goals in the first half but that inspired Manyatera ensured he kept a clean sheet.
Led by their talisman, Mario Sinamunda,  Ferroviario, who were hoping for a home victory, found the going tough against an otherwise experienced Zesco side captained by international midfielder, Kondwani Mtonga.
Mtonga with fellow international Justin Zulu and Simon Silwimba limited Ferroviario’s movements in the midfield where the Mozambicans were clearly second best.
The backline built around Bernard Mapili, Dauti Musekwa, Bornwell Silengo and Gift Sakuwaha was also equal to the task, thwarting most of the Ferroviario’s raids and gave adequate cover to goalkeeper, Lameck Nyangu.
After the match, Lwandamina, who was hoping for a winning start to his reign at Zesco, rued his charges’ many scoring opportunities.
Lwandamina promised to work on the frontline deficiencies ahead of this Saturday’s return leg at Levy Mwanawasa Stadium in Ndola which Zesco need to win to remain in the competition.
He said he had now known what type of opposition Ferroviario and hopes to get a victory in the return leg.
As Zesco will be hosting Ferroviario, Zambia’s 2014 Champions League representatives, Nkana will be engaged in an uphill battle in Uganda against Kampala City Council Authority following a 2-2 draw in Kitwe at the weekend.
The winner between Zesco and Ferroviario will face either Moroccan side, MAS Fes or Medeama of Ghana.
MAS Fes, the 2011 Confederation Cup winners, are not strangers to Zesco as they knocked out the Zambians in the same year from the Champions League.