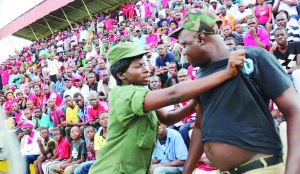 • A Police officer roughs up a suspected Nkana fan during the 2014 CAF Champions League first round, first leg match against Kampala City Council Authority (KCCA) at Arthur Davies Stadium in Kitwe at the weekend. The teams drew 2-2. Picture by JEAN MANDELA

KITWE – NKANA coach Masauso Mwale is optimistic his side will produce a comeback result against KCCA of Uganda to advance to the second round of the 2014 CAF Champions League.
The Zambian club on Saturday failed to capitalise on home advantage against the visitors from Uganda who were reduced to 10 men in the 58th minute before snatching a late equaliser to secure a 2-2 away draw.
Mwale said they had three days in which to rectify their mistakes before heading off to Kampala.
“We created a lot of chances and couldn’t just put them away. We now know their weakness and strengths now,” Mwale said.
“We are going to go flat out and win the game in Uganda.”
Mwale rebuffed any notions that the change of venue was also a factor in the draw after the match was moved from Nkana Stadium to Arthur Davies Stadium on Thursday due to a waterlogged pitch.
“So when one says that about the pitch what happens when we go to Uganda? It didn’t have any negative impact but I want to believe we shall correct our mistakes,” Mwale said.
Meanwhile, Nkana have blown hot and cold in their first return to CAF club cup action since 2002.
In the preliminary round, Nkana lost 2-0 away to Mbabane Swallows of Swaziland on February 9 before overturning that result a week later in Kitwe to win 5-2 to advance to the first round.
However, they face an uphill battle to repeat that feat this time away with history still fresh of last month’s away performance in Swaziland.
KCCA coach George Nsimbe says he is satisfied with away draw with Nkana but slammed Djibouti referee Djama Abdi’s officiating.
Abdi handed Nkana a 34th minute penalty for a questionable hand ball and later reduced KCCA to ten men after sending off Tom Masiko for a second bookable offence in the 58th minute.
“Since we are away the draw is not very bad but when we go back we have to win on the 8th,” Nsimbe said.
“But the officiating wasn’t that good. It wasn’t that good because they gave away the first penalty which wasn’t a good decision but it was his decision. For me the referee wasn’t qualified.” – Supersport