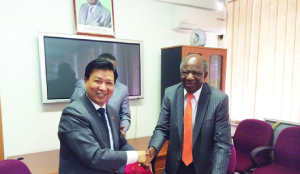 The Zambian Government has landed a US$41 million concessional loan from China for the construction of a 120 kilometre transmission line between Kariba North Bank and Kafue West to boost power output.
According to the agreement, the concessional loan would be provided to the Ministry of Finance through the Export and Import Bank of China.
Chinese Ambassador to Zambia Zhou Yuxiao and Finance Minister Alexander Chikwanda signed the Framework Agreement on March 4, 2014.
In a statement released in Lusaka yesterday, terms of the loan shall be 20 years with a grace period of seven years and the interest rate shall be two per cent.
Mr Zhou said at the signing ceremony that the power expansion project at the Kariba North Bank, which has been under construction by Sinohydro, is almost complete by now.
Two turbines with 180 megawatts each, have been added to the existing power station.
The first one was completed and handed over to the Zambian Government in December last year, while the second one to start trial-operations, will be delivered anytime.
“The transmission line, which is about 90 per cent complete, is meant to transmit the additional electricity at the Kariba North Bank to the Lusaka power grid. People in Lusaka and beyond can expect much less power cuts in the very near future,” the statement said.
Mr Chikwanda expressed gratitude to the Chinese government’s support and help towards Zambia’s endeavour to develop its hydro-power industry which in turn, can power all other industries and bring better life both for city and rural population.