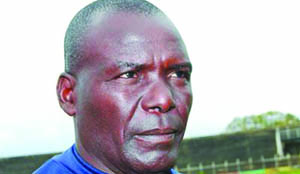 By SANDRA MWILA-
FORMER Zanaco Football coach Keagan Mumba, who died at the weekend, will be buried today at the Leopards Hill Cemetery in Lusaka.
According to family representative, Jose Mweemba,  the burial will be preceded by a church service at Chawama Dutch Reformed Church of Zambia at 8:00 hours.
Body viewing will take place at the Chawama grounds to allow friends and family to pay their last respects.
Mumba, 52, died on Saturday at the Lusaka Trust Hospital after an illness and is survived by a wife and six children.
And the Zimbabwe Football Association (ZIFA) has described Mumba as a respected and talented coach who contributed immensely to the development of the Zimbabwean sport.
ZIFA said in a statement released on Monday that the former Zambia Under-20 coach was a diligent mentor at Zimbabwean clubs, Dynamos and Black Rhinos – the two clubs he drilled in that country.