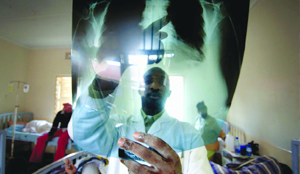 By MIRIAM ZIMBA-
THE Centre for Infectious Disease Research in Zambia (CIDRZ) says an average of 12 per cent of HIV positive adults enrolling into anti-retro viral therapy (ART) were screened for TB, despite the national guidelines directing that all new ART enrollees should be screened.
According to a media pack released to Times Health by CIDRZ head of communications Cheri Reid, 50 per cent of the patients that were screened for TB were found to be infected with TB.
The statement cited the integration of HIV care and treatment of TB in health centres as having a positive impact in improving uptake of HIV services by TB patients.
CIDRZ appealed to health workers to adhere to standardised TB screening practices for HIV patients to maximize the number of patients diagnosed with TB.
Ms Reid said the TB prevalence among new HIV care enrollees is about 28 per cent.
She said the traditional TB diagnosis of symptom screening, chest-x-rays and sputum smear are no longer effective as screening tools in the country’s population.
“TB symptom screening, chest x-rays and sputum smear microscopy are not effective as screening tools in this population as they missed 50 per cent of TB cases,” she said.
She said there is a high TB prevalence among new HIV ART patient enrollees, because compromised immunity of HIV patients makes  the standard  care for diagnosis of TB less effective.
“All HIV patients need to be screened for TB with better and more affordable diagnostic tools before initiation of ART,” she said.
She also said CIDRZ is currently supporting TB screening for pregnant women at three antennal clinics in Lusaka.
Ms Reid said TB has also been found to be prevalent in pregnant women as is the case with the general population.
“TB in pregnant women represents a public health concern as both mother and baby are at risk,” she said.
CIDRZ is currently participating in key interventions to advance TB control in Zambia through research and programmatic interventions which include evaluation of new TB vaccine in three African countries, evaluation of a simplified TB drug regimen using new anti-TB drug, and the strengthening of Zambia Prisons Health systems to improve health care delivery.