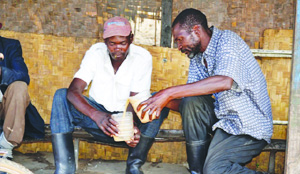 •PATRONS having a drink at a shebeen in Lusaka.

THOUGH they are found everywhere now, shebeens were and are still regarded as illegal drinking places that are only found in certain townships.
Facts indicate that the word shebeen is derived from an Irish word ‘sibin’ meaning ‘illicit whiskey’ and was a place where alcohol was sold without a licence.
In Africa, they are reportedly common in South Africa and found in townships where residents used them as meeting places to discuss political and social issues.
Shebeens in Africa sprung during the colonial era when blacks were not allowed in bars and pubs to mingle with the white folks and as such, they made their own drinking places in townships where they lived and these operated without licences.
Zambia has not been an exception in the trend of these illegal drinking places which have lived on till modern age.
Shebeens in Zambia have come with a lot of negative impacts among them social and health hazards in the townships they operate.
Members of the public have complained of some of these negative impacts as they affect the entire country.
Munyaule Market is an illegal market found near City Market and many traders in the area have raised concern of the poor hygiene due to the shebeens found in the trading area.
The first greeting you receive when you enter the market, are packs of opaque beer dumped carelessly, a sign that the drinking places in the area are busy.
Rationally every drinking place should have a lavatory, if not more to accommodate the customers but the shebeens in Munyaule Market do not have any.
The situation has forced those who drink from there to find alternative ways in answering the call of nature.
Kelly Chibwe a trader in the market said the market has only one small pot like lavatory without any proper sewer system where only the men are allowed to go as it is impossible for a woman to use.
Mr Chibwe said the market was so unpleasant to trade from as people, especially those who drink from the area have resorted to ‘flying lavatory’ to help themselves.
“Because of not having a lavatory in the market, people especially those who drink here have resorted to using packs of opaque beer to answer the call of nature as the shebeens operate even at night when all the lavatories in town are closed,” he said.
Munyaule Market is just one area affected as there are many other townships that are facing the same and even more problems caused by shebeens.
Given Moyo, a resident of Chainda township complained of the noises from Shebeens in her area.
Ms Moyo narrates how the noise from the Shebeen which is just a few metres away from her house stops her from having a goodnight sleep at as it starts very early in the morning till late hours of the night.
She complains of the noise from those drinking from the area as they also contribute to her staying up the whole night with their yells and abusive language.
“This township is never free of people who are drunk as the drinking places are open the whole time,” Ms Moyo said.
“They play very loud music the whole day and the people who drink from there make a lot of noise usually caught up in arguments resulting into insults.”
Another problem pointed out by some people is that the shebeens sell their alcohol very cheaply such that even the young children have access to the commodity.
“The cheap cost of alcohol in this township has added to the increase in early alcohol abuse and other issues like early pregnancies, high prostitution levels and the increase in HIV infections,” said one of the residents in the township.
“Poisoning at these drinking places is not something new as stories have flung around of people who have died after they came from a drinking spree and tests had proven death had been caused by poisoning,” she said.
The Lusaka City Council (LCC) has severally gone round to inspect these drinking places in many townships.
LCC spokesperson Habeenzu Mulunda said shebeens in Zambia were not legal and that was the reason they were found in informal settlements.
Mr Habeenzu said the council was trying to monitor and control these drinking places but added that it was difficult as the settlements themselves were not planned and it was difficult to locate them.
Many people in these townships such as Chainda and other unplanned settlements appreciate this kind of life because they were exposed to since they were born.
Some might not have an idea that there was a different kind of life away from the noises of a shebeen that was next door as this was what they see every day.
It is high time that the local authorities clamped down these illegal drinking places because they are a nuisance to society.
There is a lot of illegal activities such as sex and smoking that takes at these place and these play a great influence on the community.
Even without research, one could easily conclude that shebeens are contributing to the increasing numbers of defilement, rape and murder cases.