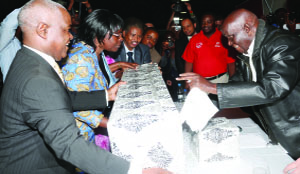 ZAMBIA Police won the KK@90 golf tournament held at the Lusaka Golf Club after garnering 123 points in an event that saw more than 260 young and old golfers take part.
The Lemmy Kajoba led Zambia Police team won the tournament that was held on Friday as part of First Republican President Kenneth Kaunda 90th birthday celebrations.
In second place was the Black Dot team who amassed a score of 113 relegating BancABC squad, who brought home 105 in the team event, into third place.
In the A Division, G. Kasonde won the event with 37 points while three players were tied on 36 points but Collins Musonda took second position on a counter back with Kwaleyela Imbuwa finishing third ahead of Clive Shamwana, who also had 36 points.
Oliver Dube won the B Division with 41 points with E. Shimishi and Mofywa Chisala finishing second and third respectively with 40 and 39 points.
In the women category, Olivia Phiri took the top title with her impressive score of 40 while Hilda Edwards was second with 36 points and third position went to Millias Siame, who beat Melisa Nawa after a count back.
And tournament sponsors, Airtel Zambia saw their K100, 000 funding get a reward as their team won the junior title with a score of 101 points.
In the subsidiary prizes, Anand Desai won the men’s title for Longest Drive short while Siame took the women’s version of the award. General Kingsley Chinkuli won the men’s nearest to the pin award while Melisa won the women category.
Meanwhile, birthday ‘boy’, Kaunda, who received assorted gifts from among others, the Zimbabwean embassy, preached love   and expressed how he missed his late wife of 60 years, Betty.
Dr Kaunda sang her a love song, stating how he missed the pillow talk, hugs and also her kisses.
Finance Minister Alexander Chikwanda showered praise on Kaunda. He said it was because of him that Zambia was an oasis of peace.
Chikwanda said there was nothing that Zambia could do to repay Kaunda for his hard work and good morals imparted into Zambians but could only send God’s blessings.
Airtel managing director Charity Lumpa paid tribute to Kaunda for showing love to not just on Zambia, but to the region and across the world.
“Thank you for not staying at the sideline when things seem impossible and difficult for you and for humanity. So Airtel involvement in the birthday celebrations is giving a token of our appreciation to him for the hard work, effort and integrity it took for us Zambians to stand before freedom today,”  she said.