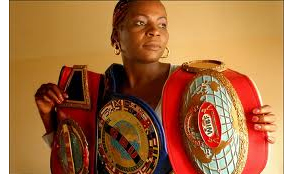 By SANDRA MWILA –
In Mongu
THE Zambia Professional Boxing and Wrestling Control Board (ZPBWCB) says it has not yet renewed the licence of former women boxing champion, Esther Phiri.
ZPBWCB secretary Simon Mwale said it was therefore premature for Esther to say that she has been given back her licence when the board was yet to decide on the matter.
Mwale said in an interview in Mongu yesterday that the board was yet to look at the application made by Esther’s promoter, Anthony Mwamba, last week, to have the licence renewed.
He said the board will have to meet and look at various issues including her medical records before declaring whether Esther, who quit the ring in 2012, was fit to fight again.
The Women International Boxing Association (WIBA) is already organising Esther to fight for the vacant middleweight title against Kenyan Charity Mukami on a date to be announced.
“For the record, we have not issued her (Esther) with a licence and it is thus premature for her to say her licence has been renewed.
As a board, we are yet to look into Esther’s issue because there a lot of matters we have to put into consideration before a licence is given,” Mwale said.
He explained that there were various procedures that needed to be followed especially that the ZPBWCB uses Mina Soko Military Hospital as its official medical centre to carry out medical examinations.
“However, it is allowed for the promoter to choose a medical institution of his choice and the medicals done from there. So we shall also look into all these issues associated with issuing licences” he said.
Meanwhile, prior to her quitting the sport in 2012, Esther had an impressive record of 13 wins, two draws and one defeat and held multiple titles ranging from the WIBA, and International Boxing Organisation (IBO).
She also held the African Boxing Union (ABU), Women International Boxing Federation (WIBF) and World Boxing Union (WBU), among others.