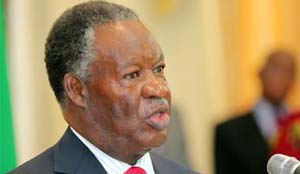 THE announcement by President Michael Sata that his Government will establish the Industrial Development Corporation (IDC) has inevitably been received with mixed feelings from a cross section of people countrywide, with some in favour and others against.

That many of those who have spoken against the idea are from the opposition camp is not surprising because some of these will oppose any idea simply because it is mooted by the Government.

It is further not surprising that much of IDC’s vocal opponents belong to the MMD which in the first place came up with what was referred to as the most liberal economy in the world which led to the dismantling of many parastatal companies, including Indeco, started during the first Republic and was performing fairly well.
Should it be established, IDC could be categorised under what is commonly known a Government-owned corporation, or a State-owned company.
Traditionally, State-owned enterprises are oriented towards domestic markets and, from experience of such firms during the UNIP-era, they often lag in terms of business performance.

One reason cited for this seeming underperformance is Government interference. Thus when the MMD came into power, it had to do away with this, charging that it made no economic sense for the Government to do business.
As a result, majority of those public sector undertakings created by the UNIP government to do commercial activities on behalf of the Zambian people were either sold to (foreign) investors or closed.

What followed from this development was a sad state of affairs. Hundreds of thousands of Zambians lost their jobs. Some of these have to date not been paid their dues while others have since died without getting their benefits.
And instead of making firms they bought productive, as was expected of them, some of the investors went on rampage, literary asset-stripping the companies they had been sold, in most cases for a song.

Surely, this was not the type of privatisation Zambians were looking forward to and, most certainly, many people are still saying they were better-off under the Government command economy or, as generally called, State capitalism.

Indeed there is nothing wrong with the Government starting a parasatal company like IDC because this too has public policy objectives, although it should be differentiated from other forms of government agencies or State entities established to pursue purely non-financial objectives.
Worldwide there are government-owned corporations and these are known for monopolies, especially in areas like railways and telecommunications, strategic goods and services (such as mail and weapons), natural resources and energy, politically sensitive business, broadcasting and what is known as merit goods (healthcare).

In short, government-owned enterprises operate in sectors where there is a natural monopoly or where the Government has strategic interests.
Looking at the high unemployment level in Zambia, job creation of necessity becomes one of the strategic areas of interest by the Government.
This is one area President Sata said IDC would tackle when he stated in his New Year’s address that it would “focus on developing labour-intensive industries and enterprises in the key areas of agriculture, construction, manufacturing, tourism, science and technology.”
Unlike what opponents of IDC are saying, evidence shows that State-owned enterprises have always been an important element of most economies, even in industrialised nations.

With specific reference to the People’s Republic of China, some of these companies have grown to become among the largest and most expanding multinational companies, and increasingly compete with private firms for resources, ideas and consumers in both domestic and international markets.

Here at home when mines were owned by the State through ZCCM, the conglomerate’s schools and hospitals were the envy of all Zambians. It was further a major employer, besides the civil service, and no wonder the Mineworkers Union of Zambia (MUZ) has thrown its weight behind IDC.
Have you heard of once famous ZIMCO conditions of service? Nearly all university and college students were looking forward to getting a job in a company where they could enjoy ZIMCO conditions of service.
These were highly attractive conditions of service for employees of companies falling under the then State-owned Zambia Industrial and Mining Corporation.

The Government has indicated that IDC in no way means a return to nationalisation. It simply wants to start something that may compete with the private sector and possibly do what the privately-run firms have failed to do, especially in the area of job creation and job security.
IDC is, therefore, a welcome idea and we join MUZ and other bodies and individuals in urging the Government to go ahead and establish this State enterprise because it could certainly be a platform for economic growth, job and wealth creation for Zambians. OPINION