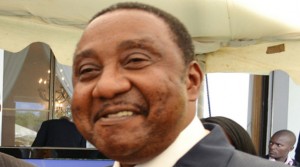 THE Patriotic Front (PF) has suspended Kasama Central Member of Parliament (MP) Geoffrey Bwalya Mwamba for allegedly bringing the name of the party into ridicule.

The decision to suspend Mr Mwamba was arrived at during the PF Northern Province committee meeting yesterday.

During his suspension, Mr Mwamba would not be allowed to perform party activities or interact with party members and officials until his petition is determined by the national disciplinary committee and the central committee.

This is according to the suspension letter signed by PF Northern Province chairperson Chomba Chipili and secretary Everest Chela dated January 14, 2014 addressed to Mr Mwamba.

“It is evidenced that from the time you resigned as minister of Defence in the Patriotic Front Government, you have never shown any remorse or kept quiet or to respect his Excellency the President of the Republic of Zambia Mr Michael Chilufya Sata who you swore to pay allegiance to,” the letter reads in part.

The provincial committee said it had been proved beyond doubt that Mr Mwamba had, since his resignation, been de-campaigning PF councillors in Lukulu, Bululu and Lukupa wards during visits to the areas made public on Radio Mano in Kasama.

“From your actions, it is evident that you are no longer loyal to the party and its leadership. Your action is tantamount to causing confusion in Northern Province and Kasama Central in particular.

“In view of the above therefore, the provincial committee that sat on 14 January, 2014 carefully studied your manoeuvres that are bent on destroying the party. Therefore, we had no option but to suspend you from the party and from performing all party activities,” the letter further reads.

Mr Mwamba was instructed not to interact with any party officials as he served his suspension.

He was reminded that according to Articles 26 of the PF constitution, a member who violates the rules and regulations would have sanctions applied against them.

Mr Mwamba resigned as Defence minister last month over some alleged misunderstandings regarding the installation of Henry Kanyanta Sosala as Paramount Chief Chitimukulu of the Bemba people.