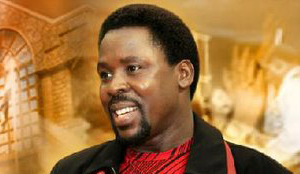 Last year, while travelling on a public bus from Ndola to Kitwe, I witnessed a physical fight between a very pregnant woman and a fairly built young man.

The fight was triggered by words uttered by the young man in which he called TB Joshua a false prophet.

The pregnant woman did not take those words kindly. She reacted by first hitting the ‘blasphemer’ with a bag she held in her hand and then went for his throat. Foolishly, the man also fought back.

Other passengers were going to join in but quick action by passengers who had no interest in what they called a useless talk saved the situation. The bus had to stop at some lay-by and the man was moved to a seat in front away from the woman.

Inquiring further about why the woman would risk her pregnancy and die to defend TB Joshua, I was told that Joshua is the man the Holy Spirit has given us today. So the man needs our protection.

When further I told the young woman that I know God and above all God knows me, there were  murmurs from a good number of passengers.