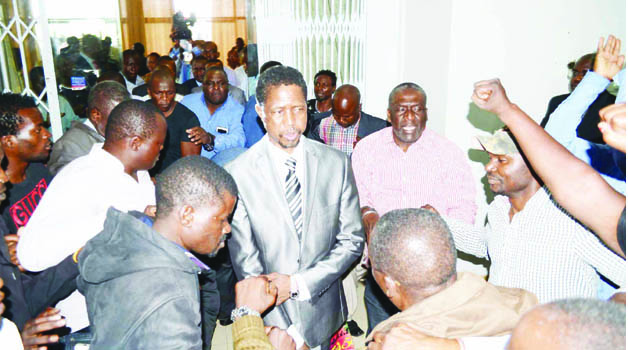 SIXTY-THREE Patriotic Front (PF) members of Parliament (MPs) and the Central Committee have endorsed party secretary general Edgar Lungu as the sole presidential candidate for the forthcoming presidential by-election.
The endorsement of Mr Lungu follows a petition presented by the MPs to the Central Committee that met at Government Complex for an emergency meeting yesterday.
Kafue MP, Obvious Mwaliteta read the petition on behalf of the MPs and urged the Central Committee to select the presidential candidate and avoid general conferences which would merely deplete party resources.
“The party cannot afford to deplete resources on a conference, but rather beef up campaign resources. Besides, we do not have the luxury of time to begin primary processes of adopting a presidential candidate when the Central Committee has the mandate to suspend some articles and clauses in our party constitution and choose a candidate,” Mr Mwaliteta said.
In addition, Mr Mwaliteta said he was mindful that every member of the PF was capable of being a president, but the unfortunate situation was that there was one person that was found in the right place at the right time.
“There is no need to be going round in circles, all of us can be president, but for now we have no choice but to support Mr Lungu,” he said.
The PF has 82 MPs. Notable among those who signed the petition were Given Lubinda, Gerry Chanda, Davis Mwila, Emerine Kabanshi, Nkandu Luo, Jean Kapata, Mwansa Kapeya, Richwell Siamunene and Poniso Njeulu.
Others were Joseph Kasonde, Ngosa Simbyakula, Jospeh Katema, Chitalu Chilufya and Luxon kazabu.
Upon the presentation of the petition, the members of Central Committee chaired by party national chairperson Inonge Wina went into a meeting which lasted more than 30 minutes and unanimously agreed to endorse Mr Lungu as a sole candidate.
After the meeting, the Central Committee members led by Ms Wina, and other members who included Chishimba Kambwili and Mr Lungu, sought an audience with Dr Scott.
“We want to meet the leader of the party to find out whether it will be necessary for us to hold a general conference, to further endorse the decision of the Central Committee, or if the decision of the committee can be communicated to the provinces,” Ms Wina said.