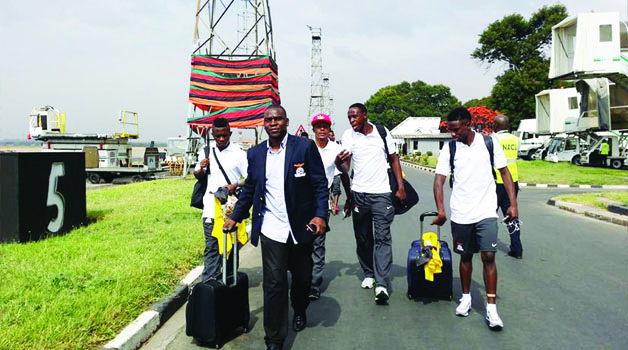 By ELIAS CHIPEPO-
THE Chipolopolo tomorrow head into the crucial 2015 Africa Cup of Nations (AFCON) Group F qualifier against Mozambique with the huge task of not only securing qualification but to put smiles back on Zambians following the death of President Michael Sata.
Zambians were in mourning for the past two weeks and, therefore, the onus now is on the Chipolopolo to beat Mozambique and bring back the smiles on faces of Zambians after what has been a difficult period.
Sport, especially football, is a unifying factor and a win against the Mambas at the Estadio Zimpeto should consolidate the peace Zambia has enjoyed in this transition period when the country prepares for the presidential by-election.
A win would brighten up many faces that have been gloomy for the past two weeks owing to the 14 days of national mourning.
Many people remember the joy and unity the Chipolopolo brought when they beat Ivory Coast in 2012 to lift the Africa Cup title. People forgot about their tribal, political and religious differences as they trooped to the streets to celebrate the feat the team had achieved.
Political players should emulate the spirit of sportsmen and women as this will contribute to a smooth transition, which is important not only for the local benefit but also instilling investor confidence.
The oneness portrayed at the football matches should be the cornerstone of the country’s route to continued social and economic development in the wake of the presidential by-election.
President Sata died on October 28, 2014 at King Edward VII Hospital in East London and was buried on November 11 this year at Embassy Park in Lusaka.
Meanwhile, Zambia lies second in the Group on five points, same as Mozambique, but the Chipolopolo have a superior goal difference and a win will secure the team qualification to the 2015 AFCON finals, whose venue is yet to be announced.
A win over Mozambique will see the Chipolopolo move to eight points but still behind already qualified Cape Verde, who are on nine points and take on Niger in a match where a win will secure the islanders top slot even before playing Zambia in Ndola on November 19.
Coach Honour Janza and the players as well as Football Association of Zambia (FAZ) president Kalusha Bwalya have all pledged to win the match and qualify in honour of President Sata.
President Sata was fully behind the team’s crusade in winning the 2012 AFCON title and even hosted the players at State House for a luncheon.
The President went on to honour Chipolopolo players and technical staff with the Order of Distinguished Service.