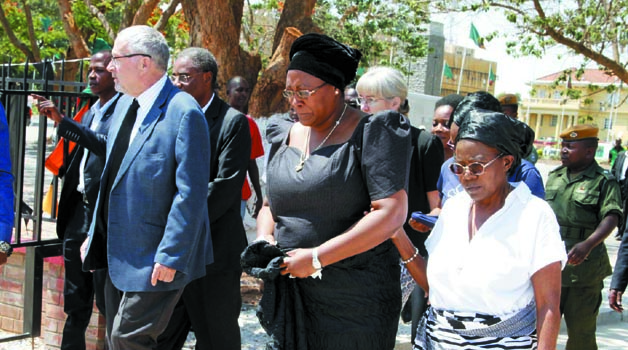 By PERPETUAL SICHIKWENKWE-
FORMER First Lady Christine Kaseba says the power struggle that has engulfed the ruling Patriotic Front (PF) is breaking the hearts of the late President Michael Sata’s family.
Meanwhile, Dr Kaseba has thanked the people of Zambia, Africa and the world at large for the befitting funeral they accorded her husband.
Dr Kaseba said Sata stood for peace, unity and love and, as such, it was disheartening to see the controversy and conflicts in the PF, and prayed that the intra-party squabbles would be resolved soon.
She was speaking yesterday when she led Acting President Guy Scott, his wife Charlotte, Local Government Minister Emmanuel Chenda, Lusaka Mayor Mulenga Sata and members of the Sata family in laying wreaths on Mr Sata’s grave at the Embassy Park in Lusaka.
The family was praying for the nation and hoped that late President Sata would intercede for the PF to overcome the wrangles in his party.
Dr Kaseba said Mr Sata was an advocate of the rule of law and that if people were in doubt of anything, they should turn to the law for guidance.
She also said Dr Scott was by law the leader of Zambia and should be respected and accorded the opportunity to lead the nation forward.
Dr Kaseba has since called on all peace-loving Zambians to rally behind Dr Scott in the less than 90 days of his acting presidency.
She said President Sata was proud of Dr Scott being his Vice-President as he used to frequently say that Zambia was the second country from the United States which had a black president.
Dr Kaseba said the late President did not go to London to die and that she was not privy if anyone was anoited to succeed Mr Sata, adding that the only anointed person was the Vice-President to take over in case something happened.
The late President had said on several occasions that he knew there were many leaders in the country who could take over and taught about democracy and expected that any Zambian who was eligible could lead the country.
Dr Kaseba said the issue of her contesting the presidency had to do with God’s will but for now she was still mourning her husband.