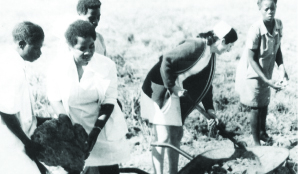 •Nurses and general workers at Ndola’s Arthur Davison Hospital work on a piece of land during the Humanism week in 1977.

Anybody who went to school in Zambia in the 70s will remember the Humanism week when institutions and individuals were required to help the vulnerable in society.
This was to live up to the Humanism ideology that Kaunda adopted when he took over power from British rule.
Humanism was highly afro-centric, being some form of African Socialism, which blended traditional African values with Western socialist and Christian values.
Though condemned by some pockets of ecclesiastical groupings, the ideology was eventually declared Zambian national ideology and philosophy in 1967.
The choice of this ideology was based on the fact that Africa had always contained much indigenous socialism which the colonialists had tried to destroy.
In short, the Zambian humanism was an attempt to rescue pre-colonial values and traditions of communal living as the basis to build the modern state hinged on native tenets.
Like every other humanism, it set out to create a society that places the human person at the centre of all activity whether, social, economic or political.
It was this part that alienated it from the church that puts God at the centre of everything. A Christian publication the National Mirror repeatedly condemned Humanism as an ideology that relegated the supreme being by defining man.
Describing the Zambian Humanism, Kaunda wrote in the book The Humanist in Africa : Zambian Humanism came from our own appreciation and understanding of our society.
Zambian Humanism believes in God the Supreme Being. It believes that loving God with all our soul, all our heart, and with all our mind and strength, will make us appreciate the human being created in God’s image.
If we love our neighbour as we love ourselves, we will not exploit them but work together with them for the common good.
Kaunda argued that the Zambian humanism was also a Christian humanism because of the place it gives to God.
He wrote that by Christian humanism, he meant that we discover all that is worth knowing about God through fellow men and unconditional service to them which he describes as the purest form of service of God.
In the book, Kaunda further writes:
I believe that man must be the servant of a vision which is bigger than himself; that his path is illuminated by God’s revelation and that when he shows love towards his fellow men, he is sharing the very life of God, who is Love.
The basic principles of the Zambian humanism were enumerated by Kaunda (2007) as follows:
a. The human person at the centre – the human person is not defined according to his colour, nation, religion, creed, political leanings, material contribution or any matter.
b. The dignity of the human person – Humanism teaches us to be considerate to our fellow human beings in all we say and do.
c. Non-exploitation of Man by Man – Humanism abhors every form of exploitation of human beings.
d. Equal opportunities for all – Humanism seeks to create an egalitarian society–that is, a society in which there is equal opportunity for self-development for all.
e. Hard work and self-reliance – Humanism declares that a willingness to work hard is of prime importance; without it nothing can be done anywhere.
f. Working together – The national productivity drive must involve a communal approach to all development programmes.This calls for a community and team-spirit.
g. The extended family – under the extended family system no old person is thrown to the dogs or to the institutions like old people’s homes.
h. Loyalty and patriotism – only in dedication and loyalty can unity subsist.
To ensure the implementation of the Zambian humanism, the UNIP government put several measures in place.
The ideology was taught in schools and colleges with civil servants being trained in various sessions on Zambian humanism.
A government ministry called Ministry of National Guidance was created headed by the late Arnold Simuuchimba to take charge of the spreading of the philosophy.
Seminars, workshops and short courses were also offered in universities on Zambian humanism.
The government media like the Times of Zambia, Zambia Daily Mail, Zambia Information Services (ZIS) were also expected to play a very significant role in propounding the tenets of the ideology.
As we celebrate Kenneth Kaunda’s 91st birthday, it is good to go down memory lane with the man who has defined the history of the country we call Zambia.