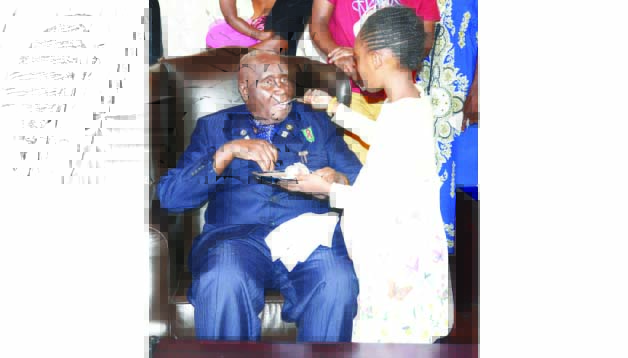 • KK displays his skills on a guitar

• Ifwe Tulelile Chalo
The song in ci-Bemba means while others are crying for suits, we are crying for our country.
Kaunda used to sing and patriotic song that lampoons people who crave for worthless things instead of pursuing real goals during the struggle for independence to incite Africans on the importance of focusing on attaining independence.
It is probably in reply to Kwame Nkrumah’s nationalist call to Seek Ye political freedom first……
Exerpts of the lyrics
Bambi balelila ama suit
Ifwe tulelile chalo.
• Rock of Ages
On Dec. 25, 1997, Kaunda was arrested on charges of inciting an attempted coup that had occurred earlier that year in October.
He was released six days later, but he was placed under house arrest until all charges were withdrawn in June 1998.
On his release from prison, a heavily-bearded Kaunda triumphantly burst into Rock of Ages which is a popular Christian hymn by the Reverend Augustus Montague Toplady written in 1763
It was an appropriate song relating to his predicament. Traditionally, it is held that Toplady drew his inspiration from an incident in the gorge of Burrington Combe in the Mendip Hills in England.
Toplady, a preacher in the nearby village of Blagdon, was travelling along the gorge when he was caught in a storm.
Finding shelter in a gap in the gorge, he was struck by the title and scribbled down the initial lyrics.
Lyrics
Rock of Ages, cleft for me,
Let me hide myself in Thee;
Let the water and the blood,
From Thy riven side which flowed,
Be of sin the double cure,
Cleanse me from its guilt and power.
Not the labour of my hands
Can fulfill Thy law’s demands;
Could my zeal no respite know,
Could my tears forever flow,
All for sin could not atone;
Thou must save, and Thou alone.
Nothing in my hand I bring,
Simply to Thy cross I cling;
Naked, come to Thee for dress;
Helpless, look to Thee for grace;
Foul, I to the fountain fly;
Wash me, Saviour, or I die!
While I draw this fleeting breath,
When mine eyes shall close in death,
When I soar to worlds unknown,
See Thee on Thy judgement throne,
Rock of Ages, cleft for me,
Let me hide myself in Thee.
Apart from Kaunda, many other dignitaries have used the song for insipiration.
The hymn was a favourite of Prince Albert, who asked it to be played to him on his deathbed, as did Confederate General J.E.B. Stuart.
It was also played at the funeral of William Ewart Gladstone.[6]
In his book Hymns That Have Helped, W. T. Stead reported “when the SS London went down in the Bay of Biscay, 11 January 1866, the last thing which the last man who left the ship heard as the boat pushed off from the doomed vessel was the voices of the passengers singing Rock of Ages.
• PAGAN MOON
Kaunda adopted this song to express his love for his wife Betty, born Beatrice Kaweche Banda (17 November 1928 – 18 September 2012).
The song is from a 1931 film Safe in Hell and was composed by Joe Burke, Al Bryan and Al Dublin.
Lyrics
I can remember that night in your arms
Underneath the pagan moon
Beneath the light on a pillow of palms
Underneath the pagan moon
(Lah-lah-lah-lah-lah, lah-lah-lah-lah)

Maybe this was a sweet maiden’s prayer
To your eyes and your lips and your hair
Only the dark came a little too soon
As we watched our pagan moon
(Lah-lah-lah-lah-lah, lah-lah-lah-lah)
• We Shall Fight
After leaving power, Kenneth Kaunda became an HIV/AIDS crusader. He continued using music to champion his causes.
This time he teamed up with Hear his erstwhile friend Rikki Illilonga in “We Shall Fight AIDS” an eleven tract CD.
He composed the song to rally Africans to fight the scourge that has claimed many lives since the mid-80s.
We shall fight and conquer AIDS x 2
, in the name of great Africa,
We will fight and conquer AIDS.
• PALIBE MUNTHU WINA OPOSA A KAUNDA
Frank Kalipinde proprietor of Kalipinde Inn composed and sang a popular pro-Kaunda song Palibe Munthu Wina Oposa A Kaunda .
The song became some kind of national anthem on radio buoying the morale of UNIP party members when Kaunda’s popularity was waning. UNIP members were pleased with the song and Kalipinde was presented with a certificate for the Presidential first award for the best song.
The certificate was presented by Fines Bulawayo during the Youth Day presentation at Lusaka’s Nakatindi Hall in March 1984.
EXERPTS FROM THE LYRICS
Kulibe Munthu wina oposa Kaunda
Aah ahh aah
Tivote yes
Chorus
Zambia sitifuna a driver awili
Tifuna chabe KK
• MWABOMBENI BA KAUNDA
At the peak of nationalistic fervour, a little known Kasama band called Kasama Bantu Actors sang a pro-Kaunda song Mwabombeni Ba Kaunda.
Exerpts from the lyrics
Mwabombeni ba Kaunda mu chalo chesu
Mwabombeni ba Makasa mu chalo chesu
Tulemuposha mwempalume sha Zambia.
Bachitwa nsombo, a Bemba musical group styled along traditional palace praise singers sang for Dr Kenneth Kaunda. Kaunda would be flanked by these praise singers at official functions.