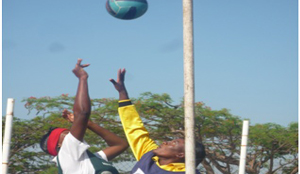 Zambia 34 Uganda 59
ZAMBIA wrapped up her participation at the Kwa-Zulu Natal 2015 Diamond Challenge Netball tournament with a defeat to Uganda to exit the competition in fourth position with four straight loses.
But despite their dismal performance, the netballers were handed a boost after Zesco Limited donated K50, 000 towards their trip to Windhoek for the Namibia 2015 Africa Netball Championship on June 27.
This place play-off saw Zambia and Uganda pitted for the second time to determine who finishes third after South Africa beat Malawi 40-35 to retain the title on Friday night.
However, it was the She Cranes, as Uganda are known, who completed a double over Zambia following a 59-36 victory in a round robin game played earlier in the week at the Ugu Sports Centre Margate KZN arena in Durban, South Africa.
Uganda built to a slow start 14-12 in the opening quarter before stretching the lead to 29-20 by half time over Zambia and by the third quarter, they had a healthy 44-27 lead and marked an incredible finish, winning 59-34.
The Diamond Challenge is a competition featuring Africa’s representatives at the Sydney 2015 Netball World Cup slated for August 7 to 16 in Australia.
Meanwhile, NAZ president Getrude Mukumi expressed happiness at the gesture by Zesco. Mukumi said the amount will help towards accommodation and food for the team as the Ministry of Sports had already chipped in to help with transportation.
Mukumi said the team could have performed better at the just ended Diamond Challenge if it was not for lack of exposure as Zambia has not played enough friendly games.
“This was just a training stage for the players and I know they are definitely going to perform well at the World Cup and Africa Cup. The players are just getting to play international matches and we will work on exposing them to more and the Africa Cup will another good platform to get exposure for the World Cup,” he said.
Zambia will connect straight to Namibia ahead of the Africa Cup which commences on June 27 and ends on July 4.
Coach Charles Zulu was confident that the tournament has taught both the coaching bench and players valuable lessons ahead of the Africa Cup.
“This was an important tournament as it gave us an insight of the team ahead of both the Africa and World Cup finals.