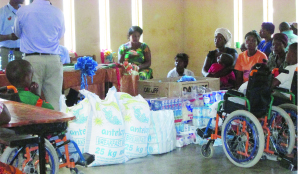 •SOME recipients of the assorted items donated by Mulonga Water and Sewerage Company in Chingola to mark Zambia’s 51st independence anniversary. Picture by RACKSON SHAMUTUKU

MULONGA Water and Sewerage Company (MWSC) commemorated Zambia’s 51st independence anniversary by donating assorted items to people in need.
The MWCS members of staff chose to donate assorted items to selected charities which included Mission Children’s Home in Chililabombwe, Chibolya Old People’s Home in Mufulira, and Chitemwiko Community-based Rehabilitation (CBR) Centre in Chingola.
At Chitemwiko CBR Centre, 24 children with special needs received assorted items such as mealie-meal and groceries.
MWSC managing director Kanyembo Ndhlovu said the donations were made to mark Zambia’s 2015 independence commemoration, which was held under the  theme ‘Laying the foundation for a smart Zambia, finding forgiveness, repentance, compassion and the love of God’.
Mr Ndhlovu said the theme was well crafted for the country generally, and individuals to reflect on the past 50 years during which love and compassion had prevailed.
He said MWSC, the water and sanitation provider to Chingola, Mufulira and Chililabombwe, would continue  fulfilling its corporate social responsibilities towards the less privileged people in its areas of operations.
“MWSC has chosen a different way by giving humble donations to the needy, which is our belief that the modest help we are extending will help better the lives of the beneficiaries” Mr Ndhlovu said.
The parents’ representative, Bertha Kamwi thanked MWCS for the generous presents which she said had come at  the right time when Chitemwiko CBR Centre was facing a number of challenges.
Ms Kamwi, who gave a brief history of the centre which started in 1990, said Chitemwiko offered physiotherapy and educational health talks to parents and children with special needs.
Ndola Diocese representative and care taker for the Chitemweko CBR programme for the intellectually and physically challenged children, Martin Mwansa said he was grateful for the donations from MWSC.
Mr Mwansa appealed to well-wishers and other organisations to come on board and support children with disabilities most of whom had no access to education.