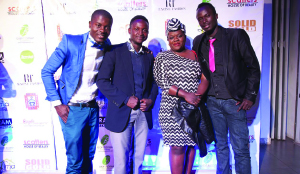 NDOLA is set to unleash entertainment bliss when a new movie entitled ‘Pay Back’ is premiered on an international red carpet.
Movie scriptwriter, Wyclif Mwaba said the K50, 000 action movie, which would be launched next February, would depict a character of a fighter ready to do anything for a lost lover.
Mwaba said the movie, once launched, would change the perception of people on the Zambian movie industry and put the industry on the Africa map.
“Next year we will premiere a movie titled ‘Pay Back’ like it is done on the international red carpet.
“The movie, which will be shot under a K50, 000 budget fund, will put the Zambian movie industry on the African map,” he said.
Mwaba, whose movie industry journey started in 2005 behind the scenes of ‘What a life ‘ as scriptwriter, says his ‘Pay Back’ movie would star 2014 international theatre festival best lead actor, Leo Simukoko.
He describes his acting in the Muvi Television comedy ‘Pa Job’ as part of his journey that would make a difference in the movie industry.
He explained in an interview that the movie would be entirely shot on the Copperbelt and will also include Jive FM DJ Jolie Mukadi, a.k.a J Breeze, Isaac Muleya, Abiaty Yoko, Mbaita Mulusa, Josephat Kalunga, Zondiwe Lungu, and Mirriam Lungu.
Mwaba said his sole sponsorship of the movie was a risk worth taking as it would not only unveil the Zambian artistes’ creativity, but would turn around the movie industry in Zambia.
Copperbelt arts and culture officer Prince Lamba says Government was dedicated to sponsoring and helping artistes with creative work.
Mr Lamba said Government was committed to supporting artistes showing artistic excellence in order to retain identity as a nation.