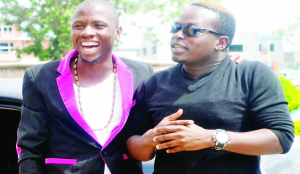 UGANDA’S comedian Alex Lamu puts his King Kong tag on show as he hosts a Night of Comedy this evening.
Lamu, who is commonly known as King Kong, arrived in the country on Thursday.
His show is billed for the New Government Complex.
Lamu, who is well known for his musical videos, gained popularity for his famous song Maria Rosa which has been a hit among the youth.
The 28-year-old comedian started his comedy in primary school before he dropped out of school due to lack of funds.
Lamu became a well-known local comedian for Uganda in 2010.
He believes comedy is what he does better not because most people in Uganda are competing to be the best comedians too, but because it is what he could do better since primary school.
The comedian says he wants to leave an indelible mark in the minds of those who will attend his show.
“I’m sure people will think I can only perform in comedy but no, I am also a singer unlike a number of comedians and musicians who just do one thing, but I am a full package,” Lamu says.
Being in Zambia for the first time, the comedian says he expects to create more friends among the local comedians and others so that his next visit to Zambia will be on a social basis.
Lamu says Zambians should support each other in developing comedy in the country.
“People should be able to do without certain comedians in case of one’s absence because people attending some events cannot afford to be bored because the best comedian is not available,” he concludes.
Local comedian Collins Zulu says it is pleasing that Zambia has continued to be entertained by international comedians.
Collins says there is need for Zambian comedians to work together in achieving their goals to be able to entertain people in other countries.
“Zambian comedy is growing. A number of people are joining the industry and we now have a Zambian comedy magazine but we haven’t done much in reaching a big audience.
“We need to travel to other parts of the world and promote our local comedy,” Collins says.
He hopes local comedy will develop more and more as time goes by in order for it to gain an following internationally.