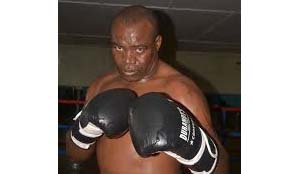 By Adrian Mwanza –
FORMER national heavyweight champion Joseph ‘No Pressure’ Chingangu yesterday lost his cool as he almost punched some photo-journalists that were taking pictures of him as he appeared for trial at the Lusaka Magistrate Court.
Chingangu, 46, of Flat number 12 Merzaf, Chilenje Township is charged in the first count with theft of a motor vehicle and in the second count with burglary and theft.
He uttered unprintables at journalists from various media institutions after noticing that they were taking pictures of him and his children.
Chingangu yelled unprintables and was only restrained by vigilant court officials who managed to calm him down and advised him against attacking the journalists but concentrate on his case.
“I warned these people not to take pictures of me and especially when I am with my children, it’s very offensive,” Chingangu said as the court officials restrained him reminding him to watch his temper as he was a public figure.
Meanwhile, Chingangu’s case did not take off after witnesses failed to appear before court prompting the prosecuting team to appeal for an adjournment.
Magistrate Nchimunya Simaubi adjourned the matter to April 11.
It is alleged that Chingangu on February 4, 2016 stole a Toyota Probox registration number ALH 7159 valued at K32, 000 belonging to Peng Teng Kang.
Chingangu is additionally suspected to have on February 4, 2016, with some other unknown persons, broken into Peng’s residence where they stole assorted items valued at K156, 752.
Among the stolen items was a one 42-inch television set, five suitcases, some necklaces, two Huawei cellular phones, assorted personal clothes, pair of shoes, US$ 200 and K6, 000 in cash belonging to Peng.