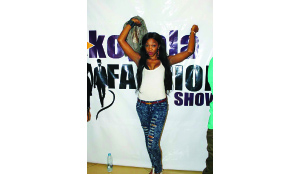 By STEPHEN KAPAMBWE –
IT’S D-day for the much anticipated Kopala Fashion Show as 10 Copperbelt-based fashion designers race for the grand prize at Zmart Mall in Ndola today.
The annual show is organised by the Ndola-based Doyen Modelling Agency and will coincide with the launch of the inaugural edition of Lavo Fashion Magazine.
Zimbabwe’s fashion designer Rumbi Chirumbwana will grace the show together with the guest of honour Taphen Mulongo, who happens to be the acting Ndola District Commissioner.
Rumbi is a creative director who owns her own fashion label called Rumbirumbi Clothing.
She is popular for women’s Pret-a-porter and Haute couture designs.
Rumbi is also known as a women’s wear designer for sportswear, urban and fashion clothing for Zimbabwe’s premium street wear brand.
The fashion designer arrived in the country a few days ago before checking in at Black Bull Lodge in Itawa.
The Kopala Fashion Show is being hosted by Lavo Events, a Doyen Modelling Agency subsidiary, under the theme, ‘Raising A Fashion Genius’.
Lavo Events director Roma Mulenga said Red Carpet will open the fashion show at 17:00 hours to 18:00 hours after which the main event will follow.
The show culminated into an annual event last year on request from Ndola Deputy Mayor Richard Kalasa.
The winning designer will have an opportunity to travel to Zimbabwe to exhibit at that country’s glamourous Fashion Week in September.
Besides that, Doyen Modelling Agency will be awarding three of the most improved and committed models.
In addition to that, a lucky model will scoop an award in memory of Esanju Kalopa, whose mother is the event’s official makeup artist.
Among the participating designers are Andela, a Fashion and Design student who runs her own clothing line called Andy Rain, Bupe Chungu, who runs La’tichu Designs, Patricia Chimuka, a street-style fashion designer, Vida Chishimba Chikwaba, a school teacher who runs La’vida Designs, Mutale Bwalya from Mutabenn Designs and male designer John Chansa, who runs Familiar Fashions.
Roma said the show, which has attracted over 15 sponsors, is featuring models from Doyen Modelling Agency which is managed by, among others, the reigning Miss Zambia – Michelo Malambo.
Rocking the night is Dj SNAI of Bo’Jangles, who will share the stage with a live band.
Being showcased will be different clothing lines and themes such as trend, Goth and Bollywood.