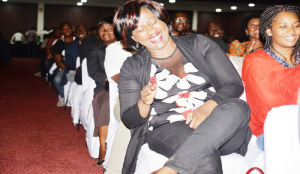 •A LUSAKA comedy fan gets her dosage of laughter at the launch of the Zamtel Comedy National festival at Mulungushi International Conference Centre on Friday night. Picture by SAM PHIRI

WHAT a night, what a show at Lusaka’s Mulungushi International Conference Centre when Zambia’s top comedians seized the stage to unleash side-splitting jokes to a huge audience that included First Lady Esther Lungu.
From the terraces, it was certain that the First Lady, who was accompanied by Home Affairs Minister Davies Mwila, got her good dose, if not an overdose, of laughter, fun and joy for the night.
Although the comical material that was unleashed was familiar to most of the people, the degree of recycling was on a higher side such that it proved workable this time around, making the jokes sound fresh.
With a rich line-up of stand-up comics ranging from ‘the president’ Banda, Obre Luo, Patrick Salubusa, a.k.a Saulosi, Brighton Sinkala ‘the big head’, Derrick ‘Chalo’ Khondowe, alias Dangerous Jo’burg, and Bob ‘Dorika’ Nkosha, people felt the value for their money.
It was an all-male line-up of comedians without a single female, maybe with an exception of the ‘convertible’ Dorika.
Maybe that is why the first lady made a special appeal to the comedy fraternity just few minutes before the kick-off of the show when she said: “I am also looking forward to seeing more female comedians take centre stage in this industry.”
Although all the comedians were on point in unleashing their packages, people could not wait for the very last act of Zambia’s finest ‘Diva’, Dorika.
Many who watched his last Lusaka act when he played a born-again Dorika in the United Church of Zambia women’s uniform were anticipating the continuation of his new lifestyle in Christ, but it wasn’t to be.
“I have been excommunicated from the church so I have joined the Roman Catholic, that’s where I am, I should not hear anything especially from you reporters ati… Dorika balimutamfya (Dorika was excommunicated) I will sort you out,” he announced.
The other comedian who made an impact to an extent of making the first lady shed tears of laughter was Brighton Sinkala whose jokes were a little bit unique from the common and much recycled ones. It was a show that can easily be described as brilliant.