First Lady reveals the artiste in her
Published On April 7, 2016 » 2631 Views» By Hildah Lumba » Entertainment, Others
0 stars
Register to vote! 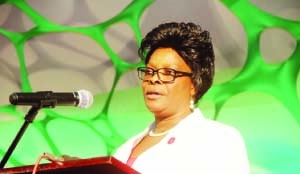 FIRST Lady Esther Lungu has revealed that she was one of the backing vocals for the late legendary folk singer Lazarus Tembo.
Mrs Lungu disclosed this when she graced the Zamtel comedy festival at Mulungushi International Conference Centre in Lusaka last Friday.
Together with one Betty Myeya, Mrs Lungu featured on the songs of the former minister of State for Culture in the Government of First Republican President Kenneth Kaunda.
The folk singer was the first visually impaired man in Zambia to serve in a Cabinet portfolio.
The First Lady even gave the audience a 15-minute snippet of one of Lazarus Tembo’s songs to the delight of the cheering audience.
“I was very excited when I received the invitation to attend the comedy night at Mulungushi mainly because of my arts background back then,” she told the audience.
In the past, she said, the National Arts Council (NAC) had exchange programmes with other countries to inspire female artists, especially those engaged in music and drama.
Mrs Lungu, who was involved in drama at the time, participated in one exchange programme where she was part of a group of female artists that were sent to Ghana to learn about theatrical productions.
“I was one of those ladies chosen to join the group, so coming to this occasion tonight is very refreshing for me,” she said.
Mrs Lungu said arts, such as comedy, were like medicine that could make a sickly person get better and help heal a wounded soul.
She urged comedians in the country to explore various media platforms, such as YouTube, in order for them to build their skills as well as help to build show business into an economically viable industry.
Mrs Lungu said Zambia should emulate the western world which makes in excess of up to US$300 million a year through comedy productions.
She called for the establishment of training institutions for comedy, drama and arts training facilities and programmes in Zambia.
She said women should be encouraged to take up the role of comedians and be active in other aspects of the creative arts.
She paid a tribute to Zamtel and Shoprite, as well as all the comedians for partnering with the Esther Lungu Foundation which would receive 30 per cent of all the collections made at the comedy festival.
The contribution would go towards the vulnerable people through the Esther Lungu Foundation.
The First Lady was accompanied to the show by Home Affairs Minister Davies Mwila, Tourism and Arts Minister Jean Kapata said comedy and arts still remained crucial for the Government as it contributed to the economy.
Ms Kapata said that comedy is nature, adding that laughter is a balance to any human being’s mind and well being.
Ms Kapata reassured the public that the Government, through the NAC, would continue to support the growth of arts in general and comedy in particular.
On stage to set off the rib breaking jokes were leading comedians, among them Derrick Chalo Kondowe, Popularly known as Dangerous Joburg, Collins, Bob Mkosha who also doubles as Dorika, Patrick Salubusa, aka Saulosi, Obre Luo ‘The Unza’, and Brighton ‘Big Head’ Sinkala.
Derrick Khondwe, the host, did not disappoint at all as chuckles, giggles and outright laugher filled the conference centre at members of the team of comedians took turns to showcase the mettle.
Brighton Sinkala and Dorika were the odd ones as they went out of their way to make Mrs Lungu, Mr Mwila and the rest of the audience to laugh the Friday night away.