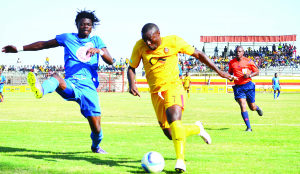 At Sunset Stadium
Zanaco 3 Nkwazi 0
A dominant second half performance saw Zanaco batter Nkwazi to move top of the MTN-FAZ Super League table on goal difference ahead of Nkana who host champions Zesco United today.
After a tight cautiously played first half, Zanaco broke the deadlock through Fashion Sakala in the 52nd minute when he headed in a Fackson Kapumbu well taken free-kick.
This was after Gilbert Tembo fouled Charles Zulu with Sakala, who was denied by the post in the 14th minute, rising highest to give the bankers a deserved lead while Musukuma Chipungu wasted a good chance to level for Nkwazi when he headed wide an Edward Mwamba pass.
It was a match dominated by headers as substitute Saith Sakala, who came in for Dave Daka, made it 2-0 after connecting a Fashion Sakala cross before captain Ziyo Tembo joined the party six minutes from time with a header off a hard working Kapumbu free-kick.
Power 2 Warriors 1
Power Dynamos gave new coach Danny Kabwe the best possible welcome with a home in over Kabwe Warriors, reports KALUMIANA KALUMIANA from Arthur Davies Stadium in Kitwe.
It wasn’t all plain sailing for Power against a stubborn Warriors side especially in the first half whose highlight saw Solomon Sakala’s speculative drive from half way inside the home side’s own area tapped over the bar by goalkeeper Joshua Titima.
Power’s nerves were calmed thanks to Martin Phiri’s ruthless finish from close-range in the 27th minute after a flowing move involving Fwayo Tembo and Larry Bwalya.
Warriors equalised in the 36th minute when Josphat Kasusu head in Godfrey Ngwenya’s freekick.
Power snatched their fifth straight home win in the 56th minute through Francis Kasonde who poked in the ball after Warriors succumbed to a high pressing move by the home-side.
Dynamos 0 Forest 2
It was a good return for former Lusaka Dynamos head coach Perry Mutapa as his watched his Forest Rangers side easily claim maximum points off the struggling and relegation fearing side, reports YVONNE SAKALA.
Forest, now on 21 points, took the lead in the seventh minute when Ronald Chibwe headed in a Nawa Nawa cross before the provider turned scorer 12 minutes later after finishing a Mundia Mukokwa pass. Dynamos are on 14 points.
Tigers 2 Blackpool 0
From Independence Stadium, ADRIAN MWANZA writes that Mufulira Blackpool remain winless and bottom of the league after suffering their ninth defeat of the season to be on six points.
Francis Chongo scored in the seventh after finishing off a Musetwa Simutowe pass slotting in the ball passed Blackpool keeper Charles Mulenga.
Martin Bwalya notched home a header from a Malela Sapu cross to propel Lusaka Tigers away from the relegation zone to be on 17 points.
Rangers 1 Eagles 0
Justin Chinama second match of his four game ultimatum as Green Eagles coach ended in a defeat away to Nchanga Rangers at Nchanga Stadium in Chingola.
Meki Mlume lone goal in the 80th minute pilled pressure on Chinama, who  started his four-game test with a win over Tigers as Eagles remain entangled in the bottom zone in 15 while their hosts are on 18 points.
Playing today: Nkana v Zesco United, Green Buffaloes v Red Arrows, and Nakambala Leopards.