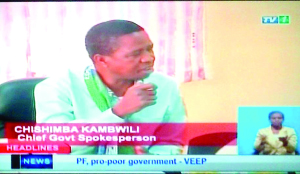 LAST week, we published a letter from a veteran broadcaster, Ambassador Frank Mutubila which, in my opinion, remains timely looking at the escalating and glaring mistakes that have continued rocking the national broadcaster’s screens.
As Ambassador Mutubila alluded to, it’s evident that there is less preparation before the main News casting is done.
Going by what has been going on of late in relation to what Mr Mutubila said; one would wonder if at all they even take 15 minutes to prepare for the News casting.
Claudette Sindaza’s tongue slip that went viral and the struggle by Ellen Hambuba to pronounce the name of the UNHCR representative was just but some of the many examples.
The latest incident that many would have missed was a CG mistake of wrongly captioning the Head of State Mr Edgar Lungu as Chishimba Kambwili Chief Government Spokesperson.
Now this is very serious, who does that? This clearly shows that there is no particular attention given to the news on the Head of State with the great significance attached to it.
This platform feels so because there was nothing relating to Dr Kambwili in the subsequent news items and one wonders how his name was wrongly placed under President Lungu’s footage.
As if this was not enough, there was another error of the reporter’s name, and one wonders how it might have happened because these special reports are compiled way in advance and edited.
It was another CG mistake where reporter Michael Kaumba was wrongly captioned as Michael Kaingu reporting.
With wonderful technology magic of the new DStv Explora Decoder which does the business of recording, rewinding and pausing of the live TV, most of such mistakes are yet to be exposed.
Broadcasters have no choice but to up their game or lose credibility due to such avoidable mistakes that would simply require an investment of not money but time.
Surely, if ZNBC invested in rehearsal time before news casting as Mr Mutubila said, all these mistakes would have been avoided and corrected in the one-hour recommended news preparation period.
To borrow the exact words of Mr Mutubila, he said:
“The issue of getting in a twist with names like in the case of
Claudette Sindaza is unfortunate because she is usually a good reader.
However, this could be attributed to less time spent on going through the bulletin. (Now the key word here is “Less Time”)
I don’t know about now, during our time we used to be in the newsroom at least no less than one hour before broadcast going through every story as news was being prepared after which a rehearsal was done with the staff involved with news production.
We also consulted on pronunciation and anything we were not sure of.
In terms of foreign names, we developed a network with diplomats (Press Attaches) who we counterchecked with.
Further, in reference to Claudette this could have been a lapse on concentration because the politician in question is well known and this gaffe should not have happened.”
This is a challenge not only to Masuzyo Ndhlovu’s team but to most local television stations especially during this campaign.
One ZNBC reporter who I shall not name but will know himself upon reading this gave a very lousy excuse of fatigue.
“We are very busy with the election coverage and there is less time because we are always up and down covering election campaign news,” he said.
Surely, are you telling me that the likes of Chilufya Mwelwa, Jack Mwale or Claudette Sindaza who are well known news casters also go out there to cover political rallies?
If that is the case, then there is a serious problem that would
surely be attributed to the poor delivery of the news.
This is why Mr Mutubila suggested last week that it would make a lot of sense to reduce the number of newscasters.
I took time to look at the BBC World on DStv channel 400 and saw that there is a very small and specific number of news casters.
Anyway, the bottom line and the issue at hand is that there is need to take time on preparing the newscast.
We end here today but pleased lets continue interacting via text,
WhatsApp or call 0974372181 or 0962215687. Email samphiri77@gmail.com