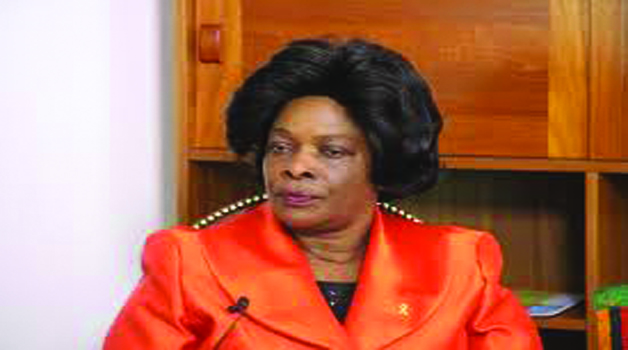 By SAM PHIRI and CHUSA SICHONE –

FIRST Lady Esther Lungu has directed the police under the Victim Support Unit (VSU) to arrest perpetrators of the recent stripping and sexual abuse of a known woman in Kafue.
Mrs Lungu who shed tears said it was barbaric and un-Zambian for human beings to treat a fellow human being and a woman in such a horrifying and abusive manner.
She said such Sexual Violence against Children and women did not only threaten national development but was also a stumbling block to the proper growth and development of children and women.
“I only came to see the video last night (before last night). I could not stand what I saw…Mr Superintendent, I hope we have all the records in place and it is my desire to see to it that justice is  noted speedily,” she said.
Mrs Lungu was speaking yesterday after leading the Zambia Medical Association and other police and civil organisations in the march Against Gender Based Violence and Sexual Violence against Children.
The number of Gender Based Violence and Violence against Children cases had been on the increase in Zambia with the latest being the Kafue incident which has since gone viral.
ZMA president Aaron Mujajati said it was worrying that Zambia was faced with an escalation of GBV in forms of sexual cleansing, property grabbing, early marriages, defilement and rape.
“We are particularly focusing on the abuse of children. It is said that no child can be abused unless society allows it so it would be correct going by the statistics to say that we are letting our children down,” Dr Mujajati said.
NGOCC director Sarah Longwe said it was saddening to see how the numbers of abuse continued to escalate and yet less was done to prosecute the offenders.
Zambia police superintendent Tresphord Kasale attributed the rise of sexual abuse cases to drug and alcohol abuse, and production of pornographic materials.
Recent statistics revealed that in 2014, the country recorded approximately 11,000 cases of Gender Based Violence and in 2015 the number escalated to over 18,000. And Ms Lungu is impressed by the Sala people’s hard work and self-reliance urging Government to motivate them in various forms.
Mrs Lungu was hopeful that Government would support them by constructing good roads and bridges for the Sala people to easily transport their farm produce to market places.
Mrs Lungu further urged Government to ensure that it supported Senior Chief Shakumbila’s area with storage and processing infrastructure.
The First Lady said this when she officiated at the Ikubi Lya Loongo Ceremony fundraising dinner dance in Lusaka on Friday evening.
“Having had the opportunity of visiting Chief Shakumbila’s Chiefdom early this year, I can testify today that indeed our brothers and sisters the Sala, have every right to celebrate harvest time and to celebrate themselves as a people.
“I visited Sala-land when it was almost harvest time this year, and I can tell you that the maize was abundant, the pumpkins already maturing and there were different types of indigenous and foreign crops and vegetables,” she said.