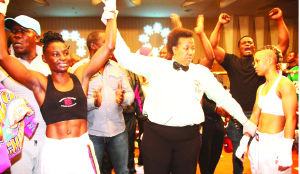 CATHERINE Phiri described loudmouth Gibisile Tshabalala’s performance as ‘nonsense’ after the South African failed to offer any resistance during Saturday night’s World Boxing Council (WBC) gold bantamweight title fight.
It took champion Catherine just a minute and 12 seconds to knock-out (KO) Tshabalala in the first round to retain her belt.
The Zambian heroine described her opponent as a waste of time who offered no resistance and that she was disappointed because Tshabalala failed to live up to expectations.
“I must say this is nonsense because I trained hard for this fight only to finish her in the first round. It would have been better if I just concentrated on my school,” said Catherine in a post-match interview.
Catherine soon declared after the fight that she was not going to fight until she completes her secondary school education by focusing on writing her Grade 12 examinations this year.
Having made all the noise heading into the Saturday night fight, Tshabalala failed to match her pre-fight undertaking of beating Catherine.
Instead, it was the powerful punches of Catherine that sent her to the ropes and failed to beat the referee’s count to lose on KO.
Fans who thronged Government complex were left disappointed as they expected more from the South African boxer.
They were stunned that the bout ended as some of them were still securing their seats.
Tshabalala said she was disappointed that referee Sylvia Mokaila stopped the fight when she still had the strength to continue.
She claimed that it was frustrating that she had prepared for three months and was stopped in the first round of the bout.
“It is very unfair that the ref stopped the fight even when I could have continued fighting, but I guess these are the rules of the game,” Tshabalala said.
However, Mokaila said she stopped the fight because Tshabalala could not continue after absorbing punches and could not take anymore.
The fight was watched by Special Assistant to the President for Press and Public relations Amos Chanda, ministry of sports permanent secretary Agnes Musunga and her director of sports Bessy Chelemu, as well as Sports Council of Zambia board chairperson Mwamba Kalenga.
Others included former ministers Davies Mwila and ardent boxing fan Steven Masumba, who is former deputy sports minister.
Meanwhile, Zimbabwean Charles Manyuchi mesmerised fans with his boxing antics after he humiliated Deogratias Samwel of Tanzania in the international welterweight non-title fight.
Manyuchi, who is the WBC champion, taunted his opponent much to the excitement of the fans who kept shouting his name and it had to take some seriousness from him to send Samwel to the ground.
Samwel tried to put up a strong fight as Manyuchi continued taunting him and the Tanzanian was caught off guard in the eighth and final round when he was dropped to the canvas.