By DELPHINE ZULU –
CHIEFTAINESS Nkomeshya of the Soli speaking people in Chongwe has been sued by her subjects for encroaching on their piece of land and sinking a borehole and other structures without their consent.
Felix, Charles and Margaret Chansa sued the traditional leader in the Lusaka High Court in their capacities as children of the late Dickson Mweene Chansa and wanted the court to grant them an injunction to restrain her from interfering with their piece of land.
The administrator and beneficiaries also asked the court to declare that farm number 28 with its initial boundaries known to the defendant as agreed in 1957, belonged to the plaintiffs and all family members and that the defendant was not entitled to enter or build on the piece of land.
The plaintiffs claimed they had suffered loss and damage following the eviction notice, as Chieftainess Nkomeshya had prevented them from exercising their proprietary rights over the farm and had ordered them to vacate their land. 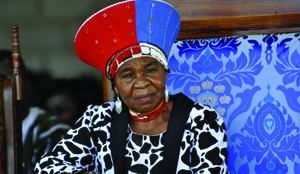 “We apply for an order of injunction to restrain the defendant, whether by herself or by her servants, agents or workmen or whosoever otherwise, from carrying out further construction works and for interfering or in any way trespassing on any portion of the said Farm 28, Chongwe,” read the statement of claim filed in the Lusaka High Court.
The plaintiff also asked the court to order for the demolition of all or any structure built on the farm, by the defendant or anyone in her direction, general damages and for trespass to land, including aggravated damages and interest on any sum found due.
The plaintiff indicated that their father settled on the piece of land in 1957, upon completion of all settlement formalities and subsequent alienation of land to him by Chief Matipula, who was reigning at the time and that the land had always been held under traditional customary land tenure.
Mr Chasha before settling on Farm 28, he agreed the boundaries of his portion of, and with chiefs and Headman Muyoba on the southern boundary of the land and based on the agreed boundaries of Farm 28, which was fenced all around with barbed wire and supported by poles without any challenge or dispute and that some initial poles that were erected in 1957 were still standing on the perimeters of the farm.
It was alleged that Chieftainess Nkomesha on or about July 2014, directed unknown people to sink a borehole inside the farm from its northern boundary without the plaintiffs’ licence or permission.
And that without any notification or warning to the plaintiffs; the defendant started constructing a structure 10 metres from the borehole and had continued doing so despite the plaintiffs’ protests.
They also complained that the traditional leader had issued a notice of eviction from their farm dated March 9, last year, which was also copied to the Zambia Police village committees.
The farm was adjacent to the defendant’s, but had been in adverse possession of her subject’s farm at all material times since July, 2OI4, without the plaintiffs’ concurrence.
The plaintiffs stated that the defendant had since threatened and intended, unless restrained by an order of the court, to continue to trespass and to build a structure.
“By construction of a borehole and a structure on Farm 28, Chongwe, the defendant has dispossessed the plaintiffs of their land without their acquiescence,” complained the plaintiffs.
However, in her affidavit in reply, the chieftainess asked the court to dismiss the action by the plaintiffs, because it lacked merit.
She said the purported land was not a farm, but a homestead and was numbered for a pilot project carried out by the Government and not by the defendant.