By EMILY KUWEMA –
THE MultiChoice Zambia Film and Television Awards (ZAFTAs) left both the audience and participants thirsty for more last Saturday at the Pamodzi Hotel in Lusaka.
Without a doubt, whoever scooped an award at the 2017 ZAFTAs last Saturday would definitely say I have made it in life.
The third edition of the awards ceremony unveiled deserving recipients of different local film makers and actors by recognizing their efforts with awards. 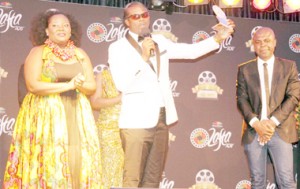 The Multi-Choice sponsored ZAFTAs, held in conjunction with the National Media Arts Association (NAMA) kicked off an 18:00 and had nothing but excitement for those in attendance until curtains closed at 22:00 hours.
The event was attended by Justice Minister Given Lubinda, National Arts Council chairperson Mulenga Kapwepwe, senior Government officials and MultiChoice Zambia representatives.
Former ambassador and television talk show host Frank Mutubila, Nabwalya Vlahakis, Owas Mwape, Mabvuto Njovu – famously known as Limbikani, Wezi, Francia, Innocent Kalaluka, Bikiloni and Difficult were among local celebrities, editors, television personalities, actors and actresses and film directors who attended the awards night.
Those in attendance were treated to a memorable and colourful red carpet moment.
The awards ceremony had the musical flavour of Dreams, who was accompanied by a team of waist wriggling dancers, Wezi and Jazz singer James Sakala.
The Chris Mongri Zulu Award for the Best Sound was scooped by Elijah Marko Tembo Jnr (Imagination) while the Antonio Katakwe Award for the Best Picture was scooped by INZY/Talent Factory for the film, Imagination.
The Maximo Chanda Mwale Award for the Best Television Series was won by Fever, a production of Global Studios.
The Charles Mando Award from the Best Television Presenter went to ZNBC’s Innocent Kalaluka for his Smooth Talk programme, while the Augustine Lungu Award for the Best Television Show was scooped by Talk It Over with Chicco, produced by Oracle Media.
Film maker Jessie Chisi, creator of the award-wining short film – Imagination – walked away with the Godfrey Kapotwe Mwape Award for Best Short Film while the Danny Sauzande Kanengoki Award for the Best Actor was presented to Bizwell Mudenda for his role in the film – Mofya.
The amazing Cassie Kabwita walked away with the Agnes Esnart Kabanana Mulimbika Award for the Best Actress for her role in Kwacha, whereas the Alfred Ziye Kandolo Award for the Best Director was taken by Owas Ray Mwape for his role in SBI.
The Joemwa Mtinje Mwale Award for the Best Script went to one Robam ‘Mwine Mushi’ Mwape for the script of the hilarious SBI.
The Graig Lungu Award for the Best Feature Film was awarded to the film SBI by Owas Crystal Films.
The chairman’s Award of recognition, presented by NAMA president Patrick Salubusa, was granted to Lottie Siame.
President Edgar Lungu said awards are very important for the recognition, motivation and encouragement of an artist during his or her journey.
He said awards provide benchmarks that are critical in defining the direction that a sector is taking.
Mr Lungu said this in a speech read for him by Justice Minister Given Lubinda during the ZAFTA awards.
“The Government wishes to congratulate both NAMA and MultiChoice Zambia for developing this smart strategic partnership that will provide multiple benefits for both partners and for the industry,” he said.
MultiChoice Zambia Public Relations Manager Mwika Malindima expressed confidence that as headline sponsor of the ZAFTAs, the pay-television company will help in motivating the arts fraternity.
He said as a leading video entertainment business in Africa, MultiChoice injected K700,000 to organise and hosting of the event.
NAMA president Patrick Salubusa said with the with the ZAFTAs having become an annual prize giving ceremony that will give local television and film personalities an opportunity to compete and market their talent, MultiChoice has made the right decision to be part of history.