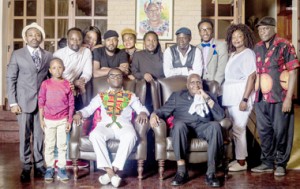 The former President listened attentively, only mumbling words of satisfaction at the end of each song.
Dr Kaunda then requested for more songs while asking, “Where have you young people been all along?”
At this point, the founding father reached for a handkerchief in his pocket to dry his teary eyes, admitting in a humorous way in Bemba, “Yaba kuti walila mwe (You can cry)”.
In his usual style, Dr Kaunda made a shot run in the living room to show how healthy he still is at 92 before greeting the musicians.
Then musicians introduced themselves to KK, who turns 93 on April 28.
For most of the musicians, it was a joyful moment.
“We came to pay our gratitude for all your works, your excellency, especially in the development of Zambian music and arts during your reign,” Tembo said.
He said Dr Kaunda had contributed so much to the development of the arts in the country that the musicians feel indebted to thank him for the job well done.
Dr Kaunda, who continually nodded his head as praises were showered on him, said, “I am humbled, greatly humbled that you came to visit me. I look forward to hearing more songs at my birthday party,” he said.
After dancing to the melodies, to the delight of the artists who joined him in the dance, Dr Kaunda advised the artists to continue being relevant to society by remaining positive at all times.
He said theirs is not an easy task.
“Society expects so much from you so don’t disappoint us,” he said.
Musician Ruff Kid, who was dressed in a KK branded safari suit and a wide brimmed hat which was popular in the days Dr Kaunda served as President, said the meeting was an experience he will live to treasure.
Others who participated in the visit, which was preceded by a photo shoot secession, were ZAM publicity secretary Mwembe ‘Muntu’ and musicians Philip Daka, CQ Muzukulu, the former Shatel duo of Barbra and Saboi, Tbwoy and upcoming singer Limpo, Saboi’s daughter.
ZAM plans to honour Dr Kaunda with a Legacy Achievement Award for supporting music and arts.
The association also wants to present the former President with a lifetime membership during Dr Kaunda’s 93rd birthday celebration planned for Mika Convention Center in Lusaka east.
Various musicians have been lined up, including the Germany based Anna Mwale, Andy Chola, Peace Preachers and the Air Power Band.