VICE-PRESIDENT InongeWina has said enhancing political will and instilling a sense of urgency are key to Africa’s vision of fast-tracking girls’ inclusion in the Information Communication Technology (ICT) revolution in the transformation of the continent.
The Vice-President also said Africa needed to invest in capacity building, skills and develop tailor-made programmes and continued training if the dream of fast-tracking girls’ inclusion in the ICT revolution was to be realised.
MsWina was speaking at the Smart Africa Women Summit in Kigali, Rwanda, yesterday.
She said there was need for political will among African leaders in order to fast-track girls’ inclusion in ICT revolution and achieve gender parity. 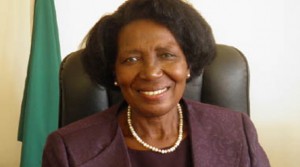 The Vice-President said investing in girls meant investing in future prosperity of a country and Africa as a whole.
She underscored the progress made by Rwanda in achieving gender parity and equity in all spheres of development, especially in ICT which forms the core of business for the Transform Africa Summit 2017.
The Vice-President said the Zambian Government was eager to learn from Rwanda how it had managed to achieve gender parity and equity in all spheres of which even the developed countries had not managed.
She said the Zambian Government came up with the National ICT Policy of 2006, which promoted usage of ICTs among women and later in 2014, the National Gender Policy which focused on the promotion and participation of women and girls in Science and Technology was devised.
MsWina said the Zambia Information and Communication Technology Authority (ZICTA), working together with the Central Statistical Office, had been undertaking regular surveys since 2013 to measure access and use of ICTs, and its impact among Women and the youth in urban and rural areas.
The Vice-President said the surveys provided information for policy and programme interventions.
She said the Government was also encouraging ICT programmes at tertiary level aimed at increasing the number of females in Science and Technology programmes, as well as promoting scientific research and innovation.
MsWina said in order to increase the number of girls venturing into Science, Technology, Engineering and Mathematics (STEM) fields, Zambia had partnered with the World Bank targeting 14,000 girls at secondary school level in 16 districts and had empowerment of 75,000 women in districts.
Rwanda’s First Lady Jeanette Kagame said women needed to be empowered so that they could contribute to the economic growth of the country.
The Rwandan First Lady said that despite the strides, more women had no access to ICT services in Africa, and called on countries to share best initiatives that were working in their respective countries so that Africa could develop.
She said her country was running a programme under her foundation where they were empowering young people with computers to ensure that girls had access to ICT knowledge.
UN women executive director under the Secretary General Phumzile Mlambo-Ngcuka said Africa had to address issues affecting women, especially to do with empowerment if the continent was to realise socio-economic transformation and bridge the gap between men and women.
The Smart Women’s Summit brought to the forefront the strategic interventions that are being pursued to empower women and girls in ICT.
It was held this year as an inaugural stream at the Transform Africa Summit led by African First Ladies and leaders from the private sector, civil society and academia. -ZANIS