By REBECCA MUSHOTA –
A POLITICAL analyst Alex Ng’oma has urged Catholic bishops to be firm when demanding for evidence from stakeholders as it facilitates for dialogue between the Patriotic Front (PF) and the United Party for National Development (UPND).
Dr Ng’oma said Zambians were happy and excited at the impending talks between President Edgar Lungu and UPND leader Hakainde Hichilema and that the Catholic bishops should rise to the occasion by insisting on evidence for the claims that the UPND would bring on the election disputes and alleged detention of their members. 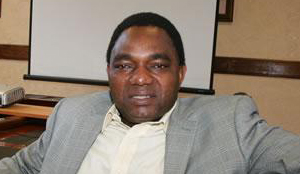 He said the differences between the UPND and the PF had heightened with the opposition political party disputing the outcome of the 2016 general elections while the ruling party was unhappy with that stance and were demanding that the UPND accept defeat and recognise Mr Lungu as President.
Dr Ng’oma said the church should demand evidence for the claims that the UPND had and should also insist that both parties raise practical pre-conditions to ensure successful talks.
“This is extremely important in establishing the legitimacy of the electoral grievance that the UPND has been harbouring since August 2016,” Dr Ng’oma said.
The nation was aware of the fact that the Catholic Church in Zambia was part of a consortium of churches and civil society, including regional and international bodies that endorsed the victory of President Lungu.
Dr Ng’oma said the demand by the PF that the UPND recognises Mr Lungu as the legitimate President was reasonable, since he was declared winner by the Electoral Commission of Zambia.
He also said the Zambia Conference of Catholic Bishops (ZCCB) should not ignore the widespread perception that the ZCCB was biased following the statement made by Archbishop Telesphore Mpundu regarding the political situation in the country recently.
Dr Ng’oma said failure by the ZCCB to clarify on the perception could undermine the noble work of dialogue that it had embarked on.
He said he was happy that the Church, which had always been the voice of reason, had stepped up to facilitate dialogue and foster national healing.