PRESIDENT Edgar Lungu has commissioned the long-awaited upgrading works of the Kawambwa-Mporokoso Road to bituminous standard to help trigger economic development.
The President said this was done in order prioritise construction of road infrastructure to connect the country and help trigger economic development in every part of Zambia.
The project will result in upgrading 122 kilometres of the road to bituminous standard, whose works will be undertaken by China Harbour Engineering Company at the cost of USD$142.2 million. 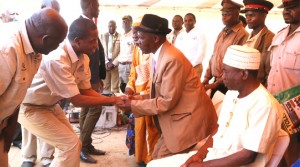 • PRESIDENT Edgar Lungu shakes hands with Chief Chama of the Chishinga people in Kawambwa District of Luapula Province shortly after  commissioning the Kawambwa-Mporokoso Road, which will be tarred at a cost of
US$142.2 million. Picture By ALEX MUKUKA/ZANIS

Mr Lungu said roads were crucial to transforming Zambia into a land-linked country and a regional transport and transit hub.
“Government under the Patriotic Front (PF) is vigorously pursuing an economic diversification agenda to move the country from copper dependence to other viable economic sectors such as tourism, agriculture and manufacturing,” the President said.
He said this at Chimpempe grounds in Kawambwa District at the ground-breaking ceremony.
Mr Lungu said transport infrastructure was crucial for Zambia to grow sectors like tourism and manufacturing, which would help the country achieve economic diversification.
The Head of State said the road construction, which would be done in 24 months, would expand tourism and agricultural activities in Luapula and Northern provinces.
Mr Lungu instructed the contractor to complete the road works within the agreed time while ensuring quality works due to the huge sums of money involved in undertaking the project.
He further urged the Road Development Agency (RDA) to ensure that China Harbour subcontracted 20 per cent of the works to small and medium-scale Zambian contractors in line with Government policy.
“I appeal to the people in the two provinces to support the contractor and guard the property against vandalism because this property is aimed at improving your livelihoods,” Mr Lungu said.
As a social corporate responsibility gesture, China Harbour Zambia will build 10 kilometres of township roads in Kawambwa and Mporokoso, one secondary school in each province and a market and a Church in Kawambwa.
The constructing company will also rehabilitate the Mporokoso District Hospital.
Housing and Infrastructure Development Minister Ronald Chitotela said the development was a milestone which would open the two provinces to growth in natural resources.
Luapula Province Minister Nixon Chilangwa said the road works and the Luapula Expo were among efforts aimed at lifting people’s living conditions while improving economic growth in the area.
China Harbour Zambia general manager Claude Peng pledged quality works on the road works.