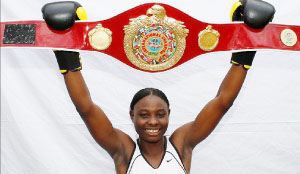 By FELIX MALUNGA-
DESPITE her South Korean opponent boasting 12 victories from 14 fights, Oriental Quarries Boxing Promotions operations manager, Christopher Malunga believes Catherine Phiri will still defend the World Boxing Council (WBC) Silver bantamweight title in November.
Malunga said Oriental would do everything possible to ensure the Zambian boxing heroine was battle-ready for Hee-Yung Yuh’s challenge on November 22 in Lusaka.
He said in an interview in Lusaka yesterday that Catherine had been training and that she would soon get into camp to intensify the preparations for the WBC title bout set for the Government Complex in Lusaka.
Malunga predicted a tough fight but was optimistic of Catherine retaining her crown after defeating the 34-year-old Yuh.
“It will be a tough fight but Catherine will win. We’ve been training and we will be getting into camp soon,” he said.
Malunga said the November 22 promotion would have six bouts which include two WBC title fights.
While Catherine will be facing Yuh, Zimbabwe-born Charles Manyunchi will be defending his WBC International welterweight belt against a yet to be named American boxer.
Oriental unveiled a K674,000 budget for the November 22 bill and Malunga said so far some companies had indicated their willingness to come on board.
To be crowned WBC Silver bantamweight champion, Catherine battered German Pia Mazelanik in March while Manyuchi beat Ghanaian Patrick Allotey to win the belt.
The 22-year-old Catherine has won all her eight career fights while Yuh has only lost twice in 14 bouts.