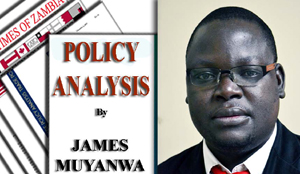 DURING the week, I was discussing with a colleague whether the free-market economic policies that Zambia seems to have been pursuing for quite some time now are in the best interest of the entire nation.

We, from the lay people’s point of view, considered whether the liberalisation of the economy has really worked for us as compared to the previous command economy.

That informal talk which took place during the lunch break motivated the lettering of today’s Policy Analysis article and I want to state, right from the onset, that in the final analysis these are merely my thoughts.

You may or may not agree with me but please bear in mind that mine is a mere opinion which is, however, based on some existing tangible facts discernible to anyone.

That settled, we have to look at some of the economic systems of production, distribution and consumption the country has so far engaged and check the main results.

I will start with socialism which from my basic research I learnt is an economic system where property is held in common and not individually.
Common ownership, however, does not entail the decisions are made collectively.

Instead, powerful individuals in positions of authority make decisions in the name of the collective group, while others are sidelined.

This system which was practised during Zambia’s Second Republic entails, on paper, collective ownership and democratic control of the means of production by the workers and the citizens.

To those aged above 30 today the memories of the pitfalls of this ystem should still be clear.

They include the distortion in prices, slow technological advancement, reduced economic incentives and shortages of basic commodities which the state is unable to provide leading to queues of consumers.
With the advent of multi-partism in the early 1990s Zambia embarked on the liberalisation of the economy which was a drastic shift.

I need not go into details of the free market economy because we are able to relate to its benefits and effects on our daily lives.
We have witnessed the situation where more and more means of production are being taken up by the private sector.

In his book titled, Wealth of Nations, Adam Smith wrote that the great object of the political economy of every country was to increase the riches and the power of that country.

One prominent aspect of this system is the existence of the market forces which, all things being equal, are supposed to be critical to the economy.

For this to effectively happen monopolistic and colluding tendencies should be eliminated and for Zambia, that is where the problem starts.

For some commodities no matter how high the supply would be their prices will not be reduced while in other scenarios even when the conditions on the market dictate the reduction of prices, the sellers will not oblige.

In economies which are responsive to prevailing factors on the matter, any subsidy on production entails reduced prices of the final product but here the situation is different as it is evident on the subsidised Farmers Input Support Porgramme (FISP).

Despite the government’s subsidy on production of maize through FISP the prices of the final commodity is abnormally high even amid bumper harvest.

The government administrations, both past and present, have at different times come up with measures aimed at reducing the cost of petroleum products which have led to the reduction in the pump prices for fuel.

Formally, that reduction is automatically supposed to translate in lower cost of public transport but that rarely happens unless stakeholders including the government pushe the operators.

I can go on to cite other examples but in short the argument is that the market forces have failed Zambians and, therefore, we cannot leave the entire economy to the free market.

In short, capitalism or whatever we can call it, has failed in Zambia. Perhaps it best suited for other countries which have already put in place mechanisms to address some of these concerns.
As already alluded to, some of the major limitations have been the downfall of work ethics and the exploitation of the consumers by those with the means of production or investors.

The heightening self interest accumulation of wealth is the reason for the failure by the players in the market to ensure benefits of subsidy, for instance, to trickle down to the final consumers.

I, therefore, wish to propose the pursuing of highly mixed economy whose mode and other details will be the subject of this column next week.